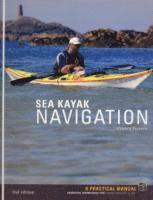 A Practical Manual, Essential Knowledge for Finding Your Way at Sea

av Franco Ferrero
Häftad Engelska, 2007-11-01
145
Köp
Spara som favorit
The first edition (0953195619 which went out of print Spring 2007) rapidly became a standard text for sea kayakers. This new edition builds on that success. There are numerous improvements in the explanations and GPS is covered in more detail, reflecting the increased availability and usage of electronic navigational aids. Full use is made of colour photos, diagrams, maps and charts, further enhancing the reader's experience. Exercises to reinforce and self-assess how much the reader has taken on board are provided at the end of each chapter."Sea Kayak Navigation" is recommended as support material for the new British Canoe Union navigation courses that are currently being introduced.
Visa hela texten

Franco began sea kayaking at the age of fifteen. He was lucky enough to be brought up in the Channel Islands. The small scattered islands, fast tidal streams and summer fogs ensured that navigation was a key skill learnt at an early age. In 1978 he was one of a team of three Jerseymen who completed the first circumnavigation of Ireland by sea kayak. In 1989, with Kevin Danforth, he made a made a record breaking unsupported crossing of the North Sea. He is the managing director of Pesda Press and still occasionally manages to fit in some freelance coaching (he is a BCU Level 5 Coach). He now lives in Wales and his interests are sea kayaking, whitewater, rock and ice climbing, and ski-mountaineering. His current passion is a twenty-nine foot yacht called 'Firebird'. He has paddled throughout the United Kingdom and in many parts of the world including Nepal, Scandinavia, the coast of Brittany in France, the European Alps, Peru and Western Canada.