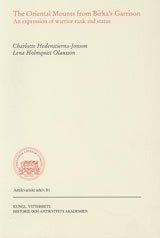 The oriental mounts from Birka's Garrison : an expression of warrior rank and status

av Charlotte Hedenstierna Jonson, Lena Holmquist Olausson
Häftad Engelska, 2006-01-01
223
Köp
Spara som favorit
Skickas inom 3-6 vardagar.
Fri frakt inom Sverige för privatpersoner.
During three archaeological excavation campaigns in the Garrison area of Birka, unique evidence of Viking Age military material culture was uncovered. Numerous finds show evidence of links between the Birka warriors and the Eastern trade route. The cultural exchange that took place along this route influenced both weaponry and dress, creating a stylistic expression described in archaeological research as oriental, oriental-style or orient-influenced. The nomadic mounted warrior of the Eastern steppes was a major influence, and the Garrison material indicates direct contact, exemplified by a complete belt-set of steppe nomadic origin. This paper focuses on the variety of oriental-style mounts found in the Garrison that had originally served as mounts on the costume and equipment of the nomad rider where they functioned as symbols of rank and status. The study shows that the Birka warriors were aware of the original intrinsic meaning and symbolism of the Eastern mounted warrior's dress, belt and belt-pouch and to an extent adopted the ideological framework associated with these.
Visa hela texten