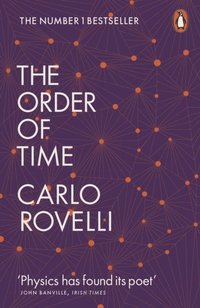 The Order of Time

av Carlo Rovelli
(1 röst)
Häftad Engelska, 2019-04-04
96
Köp
Spara som favorit
Finns i lager! Skickas inom 1-2 vardagar.
Gratis frakt inom Sverige över 159 kr för privatpersoner.
Finns även som
Visa alla 5 format & utgåvor
THE #1 SUNDAY TIMES BESTSELLER One of TIME's Ten Best Nonfiction Books of the Decade 'Captivating, fascinating, profoundly beautiful. . . Rovelli is a wonderfully humane, gentle and witty guide for he is as much philosopher and poet as he is a scientist' John Banville 'We are time. We are this space, this clearing opened by the traces of memory inside the connections between our neurons. We are memory. We are nostalgia. We are longing for a future that will not come' Time is a mystery that does not cease to puzzle us. Philosophers, artists and poets have long explored its meaning while scientists have found that its structure is different from the simple intuition we have of it. From Boltzmann to quantum theory, from Einstein to loop quantum gravity, our understanding of time has been undergoing radical transformations. Time flows at a different speed in different places, the past and the future differ far less than we might think, and the very notion of the present evaporates in the vast universe. With his extraordinary charm and sense of wonder, bringing together science, philosophy and art, Carlo Rovelli unravels this mystery. Enlightening and consoling, The Order of Time shows that to understand ourselves we need to reflect on time -- and to understand time we need to reflect on ourselves. Translated by Simon Carnell and Erica Segre
Visa hela texten

Extraordinary. . . you should read it -- Nick Hornby * Believer * Modern physics has found its poet. A captivating, fascinating, profoundly beautiful book. . . Rovelli is a wonderfully humane, gentle and witty guide for he is as much philosopher and poet as he is a scientist -- John Banville * Irish Times * A dizzying, poetic work in which I found myself abandoning everything I thought I knew about time -- Charlotte Higgins * Guardian * Wonderful. . . Time is something we think we know about instinctively; here he shows how profoundly strange it really is -- Philip Pullman * Guardian * Meet the new Stephen Hawking. . . I've never seen special relativity explained so well, never visualised it less fuzzily, never felt such a jolt of shock at what it implies -- James McConnachie * Sunday Times * I consider Carlo Rovelli to be a poet as much as a physicist. . . Everybody should read this book -- Es Devlin A joy to read. . . Rovelli writes easily, vividly and brilliantly - he is as at ease with Beethoven as he is with Boltzmann's constant, and verses by Horace launch each chapter, one of which ends with a couplet from the Grateful Dead. . . A delight -- Tim Radford * Guardian * A deep - and remarkably readable - dive into the fundamental nature of time. . . written with enough charm and poetry to engage the imagination of anyone who reads it -- Clive Cookson * Financial Times * Highly original. . . The heart and humanity of the book, its poetry and its gentle tone raise it to the level and style of such great scientist-writers as Lewis Thomas and Rachel Carson -- Alan Lightman * New York Times Book Review * Rovelli is one of our great scientific explicators. . . Not since Stephen Hawking's A Brief History of Time has there been so genial an integration of physics and philosophy -- Ian Thomson * Observer * Physics' literary superstar makes us rethink time. . . The Order of Time will surely establish Rovelli among the pantheon of great scientist-communicators -- Philip Ball * New Scientist * An elegantly concise primer makes theoretical physics intelligible. . . stunningly written -- Tom Whipple * The Times * A masterly writer. . . In this little gem of a book, Mr. Rovelli demolishes our common-sense notion of time. . . an ambitious book that illuminates a thorny question and succeeds in being a pleasurable read -- Priyamvada Natarajan * Wall Street Journal * Carlo Rovelli has achieved almost prophetic status -- Julian Baggini * Prospect * The physicist transforming how we see the universe * Financial Times * With the publication of his million-selling Seven Brief Lessons on Physics, Carlo Rovelli took his place with Stephen Hawking and Richard Feynman as one of the great popularisers of modern theoretical physics -- Sam Leith * Spectator * The most fun physicist to be with -- as well as the greatest explainer of physics -- Bryan Appleyard * Sunday Times * Anyone with the least interest in the science of the physical world will be by turns astonished, baffled and thrilled by what Rovelli has to say about the true nature of time, which has little in common with our everyday conception of it -- John Banville * Guardian * Enlightening... gives poetic voice to the common human experience of moving through time, while simultaneously leaving the reader much more equipped to understand how exactly that happens. . . A resounding affirmation of the humanity behind science * Time magazine, Best Nonfiction Books of the 2010s * Brings the most difficult ideas alive in clear, appealing language. It is as close as I've come to a physics lesson that almost suggests the meaning of life -- Rory Stewart This book has been a kind of bible for me. When life feels strange, Rovelli's books remind me that there is beauty in the strangeness. The Order of Time is one of those books that I will always go back to -- Johny Pitts

Carlo Rovelli is a theoretical physicist who has made significant contributions to the physics of space and time. He has worked in Italy and the US, and is currently directing the quantum gravity research group of the Centre de physique theorique in Marseille, France. His books Seven Brief Lessons on Physics, Reality Is Not What It Seems and The Order of Time are international bestsellers which have been translated into forty-one languages.