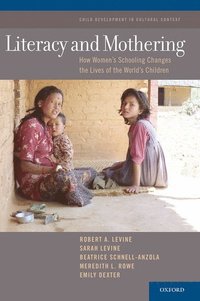 How Women's Schooling Changes the Lives of the World's Children

Robert A. LeVine is the Roy E. Larsen Professor of Education and Human Development, Emeritus, at Harvard University, where he directed the Project on Maternal Schooling that informs this book. His previous books include Anthropology and Child Development: A Cross-Cultural Reader (2008, with Rebecca S. New) and Child Care and Culture: Lessons from Africa (1994, with Sarah LeVine and others). In 2001 he received the Award for Distinguished Contributions to Educational Research from the American Educational Research Association. Sarah LeVine is an anthropologist who has conducted research on four continents and coordinated the fieldwork of the Project on Maternal Schooling. Her books include Dolor y Alegria: Women and Social Change in Urban Mexico (1993) and The Saint of Kathmandu (2008). Beatrice Schnell-Anzola is a specialist in bilingual language and literacy assessment who received her Ed.D. at the Harvard Graduate School of Education. She joined the Project on Maternal Schooling in 1992, developed its literacy assessment program, and led its Venezuela study. Her articles have appeared in the International Journal of Educational Development, the Harvard Educational Review, and Social Science and Medicine. Meredith L. Rowe is Assistant Professor of Human Development at the University of Maryland, College Park. She received her doctorate from the Harvard University Graduate School of Education in 2003 and participated in the Project on Maternal Schooling since 1999. Her research focuses on the role of parents and family factors in children's language development, and she has published articles in Science, Child Development, Developmental Psychology, and Developmental Science. Emily Dexter is a developmental psychologist whose research focuses on literacy development, academic achievement gaps, and the role of parents, teachers, and society in children's development. She was a member of the Project on Maternal Schooling while a doctoral student and postdoctoral researcher at the Harvard Graduate School of Education, and designed many of the project's quantitative analyses. Her work has been published in the Comparative Education Review, Elementary School Journal, and School Effectiveness and School Improvement.