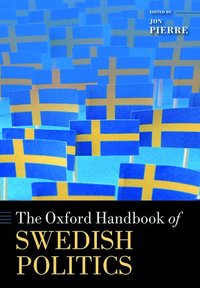 The Oxford Handbook of Swedish Politics

Carl Truedsson, LSE Review of Books the Handbook is a most welcome and sorely needed contribution. An impressively heavy, well-presented and organised tome, it paints a rich tapestry of Sweden's past and contemporary political and constitutional settlement from the dawn of the exceptional Swedish model through to its present (alleged) twilight as a beacon of prosperity and equality.

Jon Pierre is Professor of Political Science at the University of Gothenburg and Professor of Public Governance at the University of Melbourne. He is author, co-author, editor, and co-editor of more than 25 books. Jon Pierre is editor of Debating Governance (Oxford University Press, 2000) and co-author (with Guy Peters) of Governance, Politics and the State (Palgrave, 2000) and Governing Complex Societies (Palgrave, 2005). His most recent books include Globalization and Governance (Edward Elgar, 2013) and (with Bengt Jacobsson and Goran Sundstrom) Governing the Embedded State (Oxford University Press, 2015). His work has also appeared in journals like Governance, Journal of Politics, Journal of Public Administration and Theory and Journal of European Public Policy.