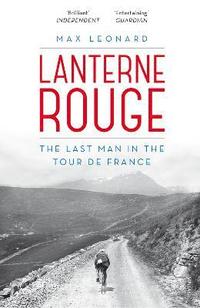 The Last Man in the Tour de France

av Max Leonard
Häftad Engelska, 2015-06-04
279
Köp
Spara som favorit
Specialorder (osäker tillgång). Skickas inom 11-20 vardagar.
Fri frakt inom Sverige för privatpersoner.
Finns även som
Visa alla 2 format & utgåvor
lanterne rouge (French | noun): The competitor who finishes last in the Tour de France Froome, Wiggins, Merckx - we know the winners of the Tour de France, but what about the men who finish last? Lanterne Rouge tells the forgotten, often inspirational and occasionally absurd stories of the last-placed rider. We learn of stage winners and former yellow jerseys who tasted life at the other end of the bunch; the breakaway leader who stopped for a bottle of wine and then took a wrong turn; the doper whose drug cocktail accidently slowed him down and the rider who was recognised as the most combative despite finishing at the back. Flipping the Tour de France on its head and examines what these stories tell us about ourselves, the 99% who don't win the trophy, Lantern Rouge forces us to re-examine the meaning of success, failure and the very nature of sport. 'A lively account of largely forgotten men... It's not easy to come up with an original angle on Le Tour, but with this rear view Leonard has managed the feat in style' Independent on Sunday
Visa hela texten

This book is an entertaining account taking in everyone from stage winners and former yellow jerseys who couldn't hang on, to a breakaway leader who stopped for a bottle of wine and then took a wrong turn, to a doper whose drug cocktail backfired * Bike Radar * This book does a great job of revealing some of the less well known stories from le Tour: well written, entertaining, and informative -- Richard Peploe * Road * Celebratory and hilarious in equal measures, The Last Man revels in the travails of the underdog -- Ben East * Metro * Leonard extracts the dignity that sometimes exists in sporting failure; this is not the world of Armstrong, Keane or Pietersen and all the more appealing because of that -- Tim Lewis * Observer * In this lively, rear-view account of largely unsung heroes, and a few villains, Leonard has managed the difficult feat of coming up with an original angle on Le Tour -- Simon Redfern * Independent on Sunday * Thoughtful, witty * Times Literary Supplement * Fascinating... Without losers, there are no winners * London Cyclist * This is a valuable book with some great stories. Deeply-researched and well-written, it's an enjoyable read that shouldn't be rushed * The Inner Ring * An elegant book... Surprising and illuminating -- Ian Bell * Herald * Makes for oddly inspiring reading. There is an art to losing -- Jon Day * London Review of Books * Brilliant... The stories of the lanternes rouges that Leonard picks out have real value, because the race's rear view can tell you much more than the angle we're all familiar with -- Michael Hutchinson * Independent * [A] lively account of largely forgotten men... It's not easy to come up with an original angle on Le Tour, but with this rear view Leonard has managed the feat in style -- Simon Redfern * Independent on Sunday * Thoughtful, properly researched and consistently entertaining -- Tim Moore Don't be surprised if you fall in love with Max Leonard's book. A glorious celebration of coming last. -- Brendan Gallagher * thetour.co.uk * Excellent ... compulsive reading...redresses the balance with considerable literary style and panache. * The Washing Machine Post *

Max Leonard's previous books include Lanterne Rouge: the Last Man in the Tour de France and Bunker Research. He has also written about cycling, travel and adventure for Esquire, Monocle, Rouleur, Strava, Rapha and others.