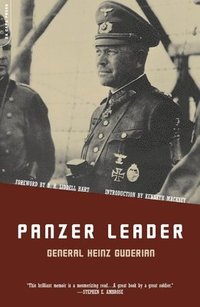 av Heinz Guderian
(1 röst)  |  Läs 1 recension
Häftad Engelska, 2001-12-01
189
Köp
Spara som favorit
Skickas inom 5-8 vardagar.
Fri frakt inom Sverige för privatpersoner.
Finns även som
Visa alla 2 format & utgåvor
General Heinz Guderian's revolutionary strategic vision and his skill in armored combat brough Germany its initial victories during World War II. Combining Guderian's land offensive with Luftwaffe attacks, the Nazi Blitzkrieg decimated the defences of Poland, Norway, France,and, very neatly, Russia,at the war's outset. But in 1941, when Guderian advised that ground forces should take a step back, Hitler dismissed him. In these pages, the outspoken general shares his candid point of view on what would have led Germany to victory, and what ensured that it didn't. In addition to providing a rare inside look at key members of the Nazi party, Guderian reveals in detail how he developed the Panzer tank forces and orchestrated their various campaigns, from the break through at Sedan to his drive to the Channel coast that virtually decided the Battle of France. Panzer Leader became a bestseller within one year of its original publication in 1952 and has since been recognized as a classic account of the greatest conflict of our time.
Visa hela texten

"This brilliant memoir is a mesmerizing read.... A great book by a great soldier."--Stephen E. Ambrose "There is no soberer and better story of how and why the Wehrmacht failed in Russia.... The military detail is touched by sharp descriptions of the fighting and vivid glimpses of the vague, distorted, half-life of men at war."--New York Times Book Review "His contempt for the Nazis is never far from the surface.... What the general does not say about the great moral and human issues of his era is as revealing as anything ever written about the mentality of the German officer corps."--New Yorker "Guderian's memoirs belong to the classics of military literature, comparable to Grant's or Sherman's."--Newsweek "Panzer Leader belongs on the shelf of every serious student of this violent twentieth century."--John S. D. Eisenhower

Heinz Guderian (1888-1954) rose through the ranks of the German military to become chief of the general staff. He was also the author of Achtung, Panzer! and With the Tanks in the East and West.