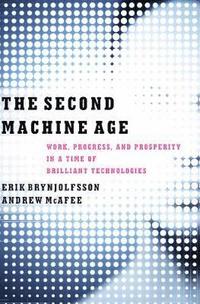 Work, Progress, and Prosperity in a Time of Brilliant Technologies

av Erik Brynjolfsson, Andrew Mcafee
(5 röster)  |  Läs 1 recension
Inbunden Engelska, 2014-02-18
238
Köp
Spara som favorit
Finns även som
Visa alla 2 format & utgåvor
In recent years, Google's autonomous cars have logged thousands of miles on American highways and IBM's Watson trounced the best human Jeopardy! players. Digital technologies-with hardware, software, and networks at their core-will in the near future diagnose diseases more accurately than doctors can, apply enormous data sets to transform retailing, and accomplish many tasks once considered uniquely human. In The Second Machine Age MIT's Erik Brynjolfsson and Andrew McAfee-two thinkers at the forefront of their field-reveal the forces driving the reinvention of our lives and our economy. As the full impact of digital technologies is felt, we will realize immense bounty in the form of dazzling personal technology, advanced infrastructure, and near-boundless access to the cultural items that enrich our lives. Amid this bounty will also be wrenching change. Professions of all kinds-from lawyers to truck drivers-will be forever upended. Companies will be forced to transform or die. Recent economic indicators reflect this shift: fewer people are working, and wages are falling even as productivity and profits soar. Drawing on years of research and up-to-the-minute trends, Brynjolfsson and McAfee identify the best strategies for survival and offer a new path to prosperity. These include revamping education so that it prepares people for the next economy instead of the last one, designing new collaborations that pair brute processing power with human ingenuity, and embracing policies that make sense in a radically transformed landscape. A fundamentally optimistic book, The Second Machine Age will alter how we think about issues of technological, societal, and economic progress.
Visa hela texten

"Fascinating." -- Thomas L. Friedman - New York Times "A terrific book. Brynjolfsson and McAfee combine their knowledge of rapidly evolving digital technologies and relevant economics to give us a colorful and accessible picture of dynamic forces that are shaping our lives, our work, and our economies. For those who want to learn to 'Race with the Machines,' their book is a great place to start." -- Michael Spence, winner of the 2001 Nobel Prize in Economic Sciences "How we build, use, and live with our digital creations will define our success as a civilization in the twenty-first century. Will our new technologies lift us all up or leave more and more of us behind? The Second Machine Age is the essential guide to how and why that success will, or will not, be achieved." -- Garry Kasparov, thirteenth World Chess Champion "Erik and Andy have lived on the cutting edge, and now, with this book, they are taking us there with them. A brilliant look at the future that technology is bringing to our economic and social lives. Read The Second Machine Age if you want to prepare yourself and your children for the world of work ahead." -- Zoe Baird, president, Markle Foundation "The Second Machine Age offers important insights into how digital technologies are transforming our economy, a process that has only just begun. Erik and Andrew's thesis: As massive technological innovation radically reshapes our world, we need to develop new business models, new technologies, and new policies that amplify our human capabilities, so every person can stay economically viable in an age of increasing automation. I couldn't agree more." -- Reid Hoffman, cofounder/chairman of LinkedIn and coauthor of the #1 New York Times bestseller The Start-up of You "Although a few others have tried, The Second Machine Age truly helped me see the world of tomorrow through exponential rather than arithmetic lenses. Macro and microscopic frontiers now seem plausible, meaning that learners and teachers alike are in a perpetual mode of catching up with what is possible. It frames a future that is genuinely exciting!" -- Clayton M. Christensen, Kim B. Clark Professor of Business Administration, Harvard Business School, and author of The Innovator's Dilemma "Brynjolfsson and McAfee are right: we are on the cusp of a dramatically different world brought on by technology. The Second Machine Age is the book for anyone who wants to thrive in it. I'll encourage all of our entrepreneurs to read it, and hope their competitors don't." -- Marc Andreessen, cofounder of Netscape and Andreessen Horowitz "What globalization was to the economic debates of the late 20th century, technological change is to the early 21st century. Long after the financial crisis and great recession have receded, the issues raised in this important book will be central to our lives and our politics." -- Lawrence H. Summers, Charles W. Eliot University Professor at Harvard University "Technology is overturning the world's economies, and The Second Machine Age is the best explanation of this revolution yet written." -- Kevin Kelly, senior maverick for Wired and author of What Technology Wants "Brynjolfsson and McAfee take us on a whirlwind tour of innovators and innovations around the world. But this isn't just casual sightseeing. Along the way, they describe how these technological wonders came to be, why they are important, and where they are headed." -- Hal Varian, chief economist at Google "In this optimistic book Brynjolfsson and McAfee clearly explain the bounty that awaits us from intelligent machines. But they argue that creating the bounty depends on finding ways to race with the machine rather than racing against the machine. That means people like me need to build machines that are easy to master and use. Ultimately, those who embrace the new technologies will be the ones who benefit most.&quo

Erik Brynjolfsson is the director of the MIT Initiative on the Digital Economy and Schussel Family Professor of Management Science at the MIT Sloan School. He is the author of several best-selling books with co-author Andrew McAfee, and one of the world's most cited scholars in information systems and economics. Andrew McAfee is the co-director of the MIT Initiative on the Digital Economy and co-author of the best-selling The Second Machine Age and Machine, Platform, Crowd: Harnessing Our Digital Future. He and co-author Erik Brynjolfsson are the only people named to both the Thinkers 50 list of the world's top management thinkers and the Politico 50 group of people transforming American politics.