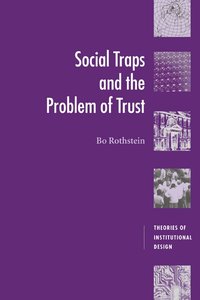 Social Traps and the Problem of Trust

av Bo Rothstein
Häftad Engelska, 2005-10-01
299
Köp
Spara som favorit
Skickas inom 7-10 vardagar.
Fri frakt inom Sverige för privatpersoner.
Finns även som
Visa alla 2 format & utgåvor
A 'social trap' is a situation where individuals, groups or organisations are unable to cooperate owing to mutual distrust and lack of social capital, even where cooperation would benefit all. Examples include civil strife, pervasive corruption, ethnic discrimination, depletion of natural resources and misuse of social insurance systems. Much has been written attempting to explain the problem, but rather less material is available on how to escape it. In this book, Bo Rothstein explores how social capital and social trust are generated and what governments can do about it. He argues that it is the existence of universal and impartial political institutions together with public policies which enhance social and economic equality that creates social capital. By introducing the theory of collective memory into the discussion, Rothstein makes an empirical and theoretical claim for how universal institutions can be established.
Visa hela texten

'This book should be required reading for doctoral programs across the full array of the social sciences. ... [This] book presents a nuanced theoretical argument that focuses on context and history of complex, cultural settings where choices are made by subjectively rational individuals within institutions that enhance or detract from the existence of trust among the participants over time. ... [This] reader has gained immensely from two close readings of the book and intends to assign it to her next graduate seminar. Thus, I can recommend the book broadly to the readers of this journal.' Elinor Ostrom, Political Psychology

Bloggat om Social Traps and the Problem of Trust

Bo Rothstein is the August Rhss Chair in Political Science at the Gteborg University in Sweden. Among his publications in English are The Social Democratic State: The Swedish Model and The Bureaucratic Problems of Social Reforms (1996), Just Institutions Matters: The Moral and Political Logic of the Universal Welfare State (Cambridge, 1998), Restructuring the Welfare State (co-edited with Sven Steinmo, 2003) and Creating Social Trust in Post-Socialist Societies (co-edited with Janos Kornia and Susan Rose-Ackerman, 2004).

1. Reflections after a very long day in Moscow; 2. On the rational choice of culture; 3. On the theory and practice of social capital; 4. Social capital in the social democratic welfare state; 5. How is social capital produced?; 6. The problem of institutional credibility; 7. Trust and collective memories; 8. The transition from mistrust to trust; 9. The conditions of trust and the capacity of dialogue.