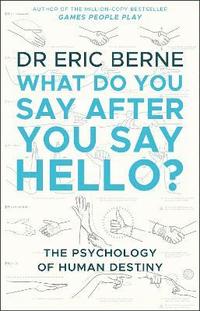 What Do You Say After You Say Hello

Gain control of your conversations and relationships

av Eric Berne
Häftad Engelska, 2018-10-04
134
Köp
Spara som favorit
Finns även som
Visa alla 1 format & utgåvor
AS RECOMMENDED BY PHILIPPA PERRY IN THE GUARDIAN: 'This is about learning what adaptations you may unconsciously have built up throughout your life and how much easier it is to connect after we have let those defences go' Have you ever met someone who seems to get their way in every conversation they have? This book explains why. From the multimillion-bestselling author of GAMES PEOPLE PLAY and one of the godfathers of modern psychology, perfect for fans of Philippa Perry, Dale Carnegie and James Clear. 'More interesting and ambitious than his best-selling "Games People Play,"... the primary virtue of Berne's descriptions is... their comprehensibility and accessibility. Eric Berne has [offered] therapy to many thousands and [provided] advice and counsel to millions more.' - NEW YORK TIMES What Readers are saying: ***** - 'This book changed my life; reading it helped me to identify the life scripts that I was unconsciously following.' ***** - 'With almost every page my understanding of human conversation improved by an insane amount.' ***** - 'If you want to communicate well and to understand yourself - and other people - better, you ab-so-lu-te-ly need to read Eric Berne.' ******************************************************************************* This book explains what makes the winners win, the losers lose, and the in-betweens so boring... In it, Dr Eric Berne reveals how everyone's life follows a predetermined script - a script they compose for themselves during early childhood. The script may be a sad one, it may be a successful one; it decides how a person will relate to his colleagues, what sort of person he will marry, how many children he will have, and even what sort of bed he will die in... What Do You Say After You Say Hello? demonstrates how each life script gets written, how it works and, more important, how anyone can improvise or change his script to make a happy ending...
Visa hela texten

Dr Eric Berne, as the originator of transactional analysis, was always recognised as an important innovator in the field, but it was not until his Games People Play became an international bestseller that his methods achieved wide popularity. In his writings, until his death in 1970, Dr Berne outlined the principles of his system in works such as Games People Play, A Layman's Guide to Psychiatry, Sex in Human Loving, and Principles of Group Treatment. Dr Berne was a practising psychiatrist in Carmel, California, and held many important posts in professional psychiatric organisations and clinics.