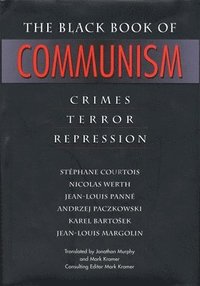 The Black Book of Communism

av Stephane Courtois, Nicolas Werth, Jean-Louis Panne, Andrzej Paczkowski, Karel Bartosek
(3 röster)
Inbunden Engelska, 1999-10-01
589
Köp
Spara som favorit
Skickas inom 7-10 vardagar.
Fri frakt inom Sverige för privatpersoner.
Beställ boken senast måndag 7 december för leverans innan julafton
Already famous throughout Europe, this international bestseller plumbs recently opened archives in the former Soviet bloc to reveal the actual, practical accomplishments of Communism around the world: terror, torture, famine, mass deportations, and massacres. Astonishing in the sheer detail it amasses, the book is the first comprehensive attempt to catalogue and analyze the crimes of Communism over seventy years. "Revolutions, like trees, must be judged by their fruit," Ignazio Silone wrote, and this is the standard the authors apply to the Communist experience-in the China of "the Great Helmsman," Kim Il Sung's Korea, Vietnam under "Uncle Ho" and Cuba under Castro, Ethiopia under Mengistu, Angola under Neto, and Afghanistan under Najibullah. The authors, all distinguished scholars based in Europe, document Communist crimes against humanity, but also crimes against national and universal culture, from Stalin's destruction of hundreds of churches in Moscow to Ceausescu's leveling of the historic heart of Bucharest to the widescale devastation visited on Chinese culture by Mao's Red Guards. As the death toll mounts-as many as 25 million in the former Soviet Union, 65 million in China, 1.7 million in Cambodia, and on and on-the authors systematically show how and why, wherever the millenarian ideology of Communism was established, it quickly led to crime, terror, and repression. An extraordinary accounting, this book amply documents the unparalleled position and significance of Communism in the hierarchy of violence that is the history of the twentieth century.
Visa hela texten

An 800-page compendium of the crimes of Communist regimes worldwide, recorded and analyzed in ghastly detail by a team of scholars. The facts and figures, some of them well known, others newly confirmed in hitherto inaccessible archives, are irrefutable. The myth of the well-intentioned founders--the good czar Lenin betrayed by his evil heirs--has been laid to rest for good. No one will any longer be able to claim ignorance or uncertainty about the criminal nature of Communism, and those who had begun to forget will be forced to remember anew. -- Tony Judt New York Times When The Black Book of Communism appeared in Europe in 1997 detailing communism's crimes, it created a furor. Scrupulously documented and soberly written by several historians, it is a masterful work. It is, in fact, a reckoning. With this translation by Jonathan Murphy and Mark Kramer, English-language readers may now see for themselves what all the commotion was about. -- Jacob Heilbrunn Wall Street Journal The Black Book of Communism, which is finally appearing in English, is an extraordinary and almost unspeakably chilling book. It is a major study that deepens our understanding of communism and poses a philosophical and political challenge that cannot be ignored. The book's central argument, copiously documented and repeated in upwards of a dozen different essays, is that the history of communism should be read above all as the history of an all-out assault on society by a series of conspiratorial cliques led by cruel dictators (Lenin, Stalin, Mao Zedong, Kim II Sung, Pol Pot, and dozens of imitators) who were murderously drunk on their own ideology and power...Courtois and his collaborators have performed a signal service by gathering in one volume a global history of communism's crimes from the Soviet Union to China, from the satellite countries of Eastern-Europe to Vietnam, Laos, Cambodia, and North Korea, and to a lesser degree in Latin America and Africa...The Black Book is enormously impressive and utterly convincing. -- Michael Scammell New Republic To the extent that the book has a literary style, it is that of the recording angel; this is the body count of a colossal, wholly failed social, economic, political and psychological experiment. It is a criminal indictment, and it rightly reads like one. -- Alan Ryan New York Times Book Review Most sensible adults are aware of communism's human toll in the Soviet Union and elsewhere--the forced starvations in the Ukraine, the Great Purge of the 1930s, the Gulag, the insanity of China's Great Cultural Revolution, Pol Pot's murder of one in every seven Cambodians, Fidel Castro's firing squads and prisons. All these horrors are now brought together in what the French scholar Martin Mali, in his foreword, calls a 'balance sheet of our current knowledge of communism's human costs, archivally based where possible and elsewhere drawing on the best available secondary evidence'...The book is all the more damning because each of the contributing scholars is either a former communist or close fellow traveler...That The Black Book infuriated the French left is a sure mark of its intrinsic worth. -- Joseph C. Goulden Washington Times The Black Book is a groundbreaking effort by a group of French scholars to document the human costs of Communism in the 20th century. Its publication caused a sensation in France when it was first released in 1997, but Americans were not able to see for themselves what the furor was all about until October 1999, when Harvard University Press finally released an English translation. It was worth the wait. Taking advantage of many newly available archives in former Communist states, the authors (many of them former Communists themselves) have meticulously recorded the crimes, terror and repression inflicted by Communist regimes across the world. It is a powerful work. -- Mark A. Thiessen National Review The authors of The Black Book of Communism are part of a welcome change in the moral-

Stephane Courtois is Director of Research at the Centre National de la Recherche Scientifique (CNRS) in Paris, and editor of the journal Communisme. Nicolas Werth is a researcher at the Institute for Contemporary History. Jean-Louis Panne collaborated on the Dictionnaire biographique du mouvement ouvrier francais. Andrzej Paczkowski is Deputy Director and a professor at the Institute for Political Studies of the Polish Academy of Sciences. Karel Bartosek is acting head of research at CNRS and the editor of the journal La nouvelle alternative. Jean-Louis Margolin is a lecturer in history and coordinator of lectures at the University of Provence and a researcher at the Research Institute on Southeast Asia of CNRS.

* Foreword: The Uses of Atrocity Martin Malia * Introduction: The Crimes of Communism Stephane Courtois I. A State against Its People: Violence, Repression, and Terror in the Soviet Union Nicolas Werth * Paradoxes and Misunderstandings Surrounding the October Revolution * The Iron Fist of the Dictatorship of the Proletariat * The Red Terror * The Dirty War * From Tambov to the Great Famine * From the Truce to the Great Turning Point * Forced Collectivization and Dekulakization * The Great Famine * Socially Foreign Elements and the Cycles of Repression * The Great Terror (1936 -1938) * The Empire of the Camps * The Other Side of Victory * Apogee and Crisis in the Gulag System * The Last Conspiracy * The Exit from Stalinism Conclusion II. Word Revolution, Civil War, and Terror Stephane Courtois, Jean-Louis Panne, and Remi Kauffer * The Comintern in Action Stephane Courtois and Jean-Louis Panne * The Shadow of the NKVD in Spain Stephane Courtois and Jean-Louis Panne * Communism and Terrorism Remi Kauffer III. The Other Europe: Victim of Communism Andrzej Paczkowski and Karel Bartoek * Poland, the "Enemy Nation" Andrzej Paczkowski * Central and Southeastern Europe Karel Bartoek IV. Communism in Asia: Between Reeducation and Massacre Jean-Louis Margolin and Pierre Rigoulot Introduction * China: A Long March into Night Jean-Louis Margolin * Crimes, Terror, and Secrecy in North Korea Pierre Rigoulot * Vietnam and Laos: The Impasse of War Communism Jean-Louis Margolin * Cambodia: The Country of Disconcerting Crimes Jean-Louis Margolin Conclusion Select Bibliography for Asia V. The Third World Pascal Fontaine, Yves Santamaria, and Sylvain Boulouque * Communism in Latin America Pascal Fontaine * Afrocommunism: Ethiopia, Angola, and Mozambique Yves Santamaria * Communism in Afghanistan Sylvain Boulouque Conclusion: Why? Stephane Courtois * Notes * Index * About the Authors