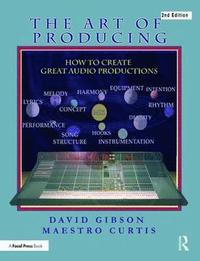 The Art of Producing

How to Create Great Audio Projects

av David Gibson, Maestro B Curtis
Häftad Engelska, 2019-02-21
479
Köp
Spara som favorit
Skickas inom 10-15 vardagar.
Fri frakt inom Sverige för privatpersoner.
Finns även som
Visa alla 3 format & utgåvor
The Art of Producing is the first book to standardize a specific production process for creating a successful music project from start to finish. Learn how to develop a step-by-step process for critiquing all of the musical components that go into creating a highly refined production that works for all styles of music. The book provides a well-rounded perspective on everything that goes into producing, including vital information on how to creatively work with bands, groups and record companies, and offers insight into high level values and secrets that famous producers have developed through years of trial and error. The book covers detailed production techniques for working with today's latest digital technologies including virtual recording, virtual instruments, and MIDI tracking. Take these concepts, adapt them to your own personal style and you will end up with a successful project of the highest attainable quality with the most potential to be become a hit - or just affect people really deeply.
Visa hela texten

"I believe "The Art Of Producing" very rapidly, will become the aspiring Producers reference Bible. It is the most thorough book I've seen that goes in depth to the whole producers process of production techniques from start to finish". - Hubert Eaves III - Producer for Luther Vandross, Madonna, Whitney Houston, Aretha Franklin.

David Gibson has been teaching, engineering and producing groups in major 24 track studios since 1982 and is the founder of Globe Institute of Recording and Production. He has done recording for James Brown's band, Bobby Whitlock (Derek and the Dominoes), The Atlanta Rhythm Sections, Hank Williams Jr.'s band, members of the Doobie Brothers, Lacy J. Dalton, and Herbie Hancock. Gibson is currently the #1 seller of Sound Healing music, also used in hospitals across the U.S, and he is the author of the best selling book, The Art of Mixing. Maestro Curtis, MALS has produced countless artists, such as Hubert Eaves III (D-Train). He has also produced his own band, Xpression, on the Kalimba Records label with executive producer Maurice White of Earth, Wind and Fire. Curtis has performed with such artists as Peabo Bryson, The O'Jays, George Benson, Phyllis Hyman, and Lenny Williams. He has also played with the Count Basie Orchestra.