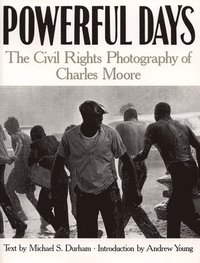 av Charles Moore
Häftad Engelska, 2008-03-01
359
Köp
Spara som favorit
Specialorder (osäker tillgång). Skickas inom 11-20 vardagar.
Fri frakt inom Sverige för privatpersoner.
This is a moving record of a remarkable era in American and southern history. Most of Charles Moore's civil rights photography originally appeared in the weekly ""Life"" magazine, for which he freelanced from 1962 to 1972. In 1989, Moore, an Alabama native, received the first Kodak Crystal Eagle Award for Impact Photojournalism in recognition of his coverage of the civil rights struggle.
Visa hela texten

Alabama photographer Charles Moore documented one of the most painful chapters of American history - the civil rights movement. Powerful Days is powerful stuff. The freedom marchers look as heroic as Iwo Jima Marines fighting their way up a mountain - which is just about what they had to do. - Newsweek ""Mr. Moore's stark, crisp photos of freedom marchers beset by police dogs and fire hoses... helped to shape the nation's conscience.... [This book] contains many images that will be wrenchingly familiar to those who lived through the proud moral turning point in American history, and that might serve to inspire younger generations."" - New York Times Book Review ""Every once in a while we receive a well-documented treasure of American history. This collection is such a treasure.... [Moore's] black-and-white photos of that era are classics of photojournalism, and as Powerful Days documents, those classics have lost none of their force and energy."" - Southern Living

Michael S. Durham was a Life reporter and editor from 1961 to 1972. He is the former editor of Americana magazine and author of two volumes of The Smithsonian Guide to Historic America. Andrew Young worked as a top aide to Martin Luther King Jr. during the 1960s. He has served two terms in the U.S. Congress, was U.S. ambassador to the U.N., and was mayor of Atlanta from 1981 to 1989.