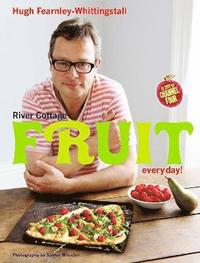 av Hugh Fearnley-Whittingstall
Inbunden Engelska, 2013-10-10
239
Köp
Spara som favorit
Skickas inom 5-8 vardagar.
Fri frakt inom Sverige för privatpersoner.
Finns även som
Visa alla 2 format & utgåvor
Fruit is pretty much the perfect food: bountiful, delicious and colourful, it also helps us to fight infection, stresses and strains. But why are we still a nation that thinks it's a bit racy to slice a banana onto our cornflakes in the morning? A 'piece of fruit' in a lunch box, on the breakfast table or at the end of a meal is all very well, but fruit is so much more exciting than this, and we don't eat nearly enough of the stuff. Perhaps this is because we don't always understand how to use it in our cooking, or how to choose the best fruit for the season. Hugh sets out to address this head on. With 180 delicious recipes, River Cottage Fruit Every Day! will show you how to enjoy a broader eating experience and make fruit easy, fun and irresistible. You'll find recipes for all the wonderful seasonal fruit that grows in this country, and learn how to make the most of fruit from other parts of the world. Recipes include marinated lamb and fig kebabs; barbecued pork chops with peaches and sage; venison stew with damsons; and parsnip and apple cakes. There are also fresh and zingy salads as well as gorgeous cakes, tarts, pies, crumbles and puddings. With glorious photography from Simon Wheeler, this book will bring amazing new fruity vitality and flavour to your food.
Visa hela texten

Hugh Fearnley-Whittingstall is a writer, broadcaster and campaigner. His series for Channel 4 have earned him a huge popular following, while his River Cottage books have collected multiple awards including the Glenfiddich Trophy (twice), the Andre Simon Food Book of the Year (three times), the Michael Smith Award (twice), the Observer Food Monthly Best Cookbook and, in the US, the James Beard Cookbook of the Year. Hugh lives in Devon with his family.