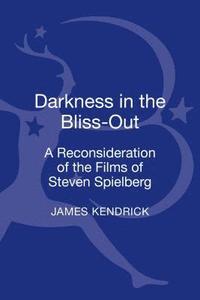 A Reconsideration of the Films of Steven Spielberg

av James Kendrick
Inbunden Engelska, 2014-07-03
1099
Köp
Spara som favorit
Skickas inom 10-15 vardagar.
Gratis frakt inom Sverige över 159 kr för privatpersoner.
Finns även som
Visa alla 3 format & utgåvor
While there has been a significant outpouring of scholarship on Steven Spielberg over the past decade, his films are still frequently discussed as being paternalistic, escapist, and reliant on uncomplicated emotions and complicated special effects. Even those who view his work favorably often see it as essentially optimistic, reassuring, and conservative. James Kendrick takes an alternate view of Spielberg's cinema and proposes that his films-even the most popular ones that seem to trade in easy answers and comforting, reassuring notions of cohesion and narrative resolution-are significantly darker and more emotionally and ideologically complex than they are routinely given credit for. Darkness in the Bliss-Out demonstrates, through close analysis of a wide range of Spielberg's films, that they are only reassuring on the surface, and that their depths embody a complex and sometimes contradictory view of the human condition.
Visa hela texten

James Kendrick is that rare critic who sees and understands the dark side of Steven Spielberg's films. Kendrick perceptively explores the ways that Spielberg has grappled in film with the nature of human suffering and with personal and historical trauma. Kendrick reveals a depth of complexity in the films that challenges the popular understanding of Spielberg as being mainly a director of popcorn movies. -- Stephen Prince, Professor of Cinema Studies, Virginia Tech, USA, and author of Firestorm: American Film in the Age of Terrorism This is a necessary book - I would say indispensable to Spielberg studies. The book develops the current burgeoning critical mass of scholarly writings on Spielberg in new ways, and is a timely addition to the field. Kendrick is an elegant writer, has grounded his persuasive close readings in a thorough account of film historical and critical contexts, and presents his case with due scholarly rigor. -- Linda Ruth Williams, Professor of Film, University of Southampton, UK "By reinterpreting a significant number of Spielberg's films, James Kendrick has convincingly argued that dark, unsettling themes and tones permeate his entire output, not just his more 'serious' films such as Schindler's List or Amistad. This book is an important, thought-provoking addition to the growing film studies scholarship devoted to Spielberg." -- Warren Buckland, Reader in Film Studies, Oxford Brookes University, UK, and author of Directed by Steven Spielberg (2006) Taking a fresh and original approach to many Spielberg films that have been scorned or misunderstood, such as the great A. I. and the flawed but fascinating 1941, James Kendrick concentrates on the dark side of Spielberg that only began to be seriously noticed after Schindler's List. In this lively, insightful, provocative study, Kendrick demolishes the conventional wisdom of Spielberg's detractors, showing how ridiculously misguided many of them are, and challenges those of us who have written more favorably on this great director to reconsider or deepen our positions. A major advance in the field of Spielberg studies. -- Joseph McBride, Professor of Cinema, San Francisco State University, USA, and author of Steven Spielberg: A Biography Kendrick's book is that rare thing: eminently readable, yet suitably academic. He does not just cover well-travelled ground but examines marginalised, if not underappreciated, works in the Spielberg canon, thus offering something new for contemplation and analysis . . . This is refreshing, thought-provoking criticism. -- Adrian Schober * Senses of Cinema * James Kendrick's 'reconsideration' of Steven Spielberg's directorial output invites readers to 'move past comfortable surfaces' to the films' 'more disturbing and unsettling aspects.' Sensitive textual analysis of selected examples identifies, explores, and explains troubling themes recurrent across Spielberg's work, while refusing to fall back on received critical opinion. Kendrick's clear, accessible opening eases from personal response into impressively concise treatment of elements of film history and theory that have conventionally defined Spielberg's status and reputation. Authoritative examination of a range of approaches, including biography and aesthetics, sociology of suburbia, narrative structure, and Jungian patterns, amounts to a provocation of Spielberg's diehard critics. Kendrick's offering is highly recommended to readers within film and cultural studies and beyond. It digs out powerful evidence of filmmaking that is complex and knowing in its engagement with the full spectrum of experience. -- Nigel Morris, Principal Lecturer in Media Theory, University of Lincoln, UK, and author of The Cinema of Steven Spielberg: Empire of Light (2007) Rather than repeat the traditional criticism that Spielberg's films are upbeat crowd pleasers, Kendrick presents a solid confirmation that the "darkness" more obvious in Schindler's List and Munich, in

James Kendrick is an Associate Professor of Film and Digital Media at Baylor University, USA. He is the author of Hollywood Bloodshed: Violence in 1980s American Cinema (2009) and Film Violence: History, Ideology, Genre (2009), as well as numerous book chapters and journal articles. He is also the film and video critic for QNetwork.com.

Preface Introduction-Steven Spielberg and the Politics of Bliss Chapter 1-'I Didn't Want to See This': Weekend America and Its Discontents in Close Encounters of the Third Kind, E.T., and Poltergeist Chapter 2-'Americans Fighting Americans': Incoherence and Animal Comedy in 1941 Chapter 3-'What Exactly Are We Applauding?' Indiana Jones and the Ideologies of Heroism and American Exceptionalism Chapter 4-'Lost and Done For:' The Rejection of War Fantasies in Empire of the Sun and War Horse Chapter 5-'For the World's More Full of Weeping Than You Can Understand': Humanity and Inhumanity in A.I. Artificial Intelligence Works Cited Index