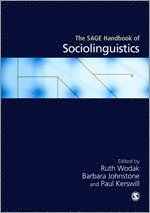 The SAGE Handbook of Sociolinguistics

av Ruth Wodak
Häftad Engelska, 2013-03-25
329
Köp
Spara som favorit
Skickas inom 7-10 vardagar.
Gratis frakt inom Sverige över 159 kr för privatpersoner.
Finns även som
Visa alla 1 format & utgåvor
"A treasure trove for sociolinguistic researchers and students alike. Edited by three leading sociolinguists, the 39 chapters cover a wealth of valuable material... And the cast list reads like a veritable Who's Who of sociolinguistics, with a refreshing number of younger scholars included along with more familiar, well-established names... This is a book that I will reach for often, both for research and teaching purposes. I will recommend it to my postgraduate students, and many of the chapters will provide excellent material for discussion in our advanced undergraduate sociolinguistics course."

"The best, the most complete and the most integrated handbook of sociolinguistics of the past decade."


This Handbook answers a long-standing need for an up-to-date, comprehensive, international, in-depth critical survey of the history, trajectory, data, results and key figures involved in sociolinguistics. It consists of six inter-linked sections:


The result is a work of unprecedented coverage and insight. It is all here, from the foundational contributions to the field to the impact of new media, new technologies of communication, globalization, trans-border fluidities and agendas of research.

The book will quickly be recognized as a benchmark in the field. It will provide a basis for reckoning its origins and pathways of development as well as an authoritative account of the central debates and research issues of today.
Visa hela texten

A superb volume that weaves together the complex threads of sociological theory, linguistic analysis and practical application that characterise this important and influential field. The contributions offer a range and depth of coverage that is not found elsewhere. Highly recommended for all serious students of the social dimensions of language
Ian Hutchby
Professor of Sociology, University of Leicester

The best, the most complete and the most integrated handbook of sociolinguistics of the past decade. It is a collection well worth having, returning to again and again and constantly keeping within easy reach for frequent reference on the part of students and faculty alike
Joshua A. Fishman
Emeritus Professor (Yeshiva University), NYU and Stanford University

Starting with the people, ideas and research that mark the genesis of sociolinguistics, this handbook takes us through its theoretical, methodological and empirical development over the last half century into the wide spectrum of work it now encompasses. It is a tough challenge to do justice to such breadth and depth in one publication, but the editors have succeeded in compiling an impressive, structured collection of chapters covering a well-chosen range of key topics in sociolinguistics, and expertly written by leading sociolinguists. This will be an important and rewarding book for all those studying the social aspects of language
Peter Garrett
Centre for Language and Communication Research, Cardiff University

The Sage Handbook of Sociolinguistics - edited by three well-known researchers in the field of sociolinguistics: Ruth Wodak, Barbara Johnstone and Paul Kerswill - is a comprehens...

Barbara Johnstone is on the faculty of the Rhetoric Program at Carnegie Mellon University, where she teaches courses in discourse analysis, sociolinguistics, style, and research methods. She is currently Editor of the journal Language in Society, and I am working on a project about the enregisterment of dialect in Pittsburgh. Professor Johnstone is interested in the connections between discourse and place and in the role of the individual in language and linguistic theory.

Barbara Johnstone's previous work has been in these areas: