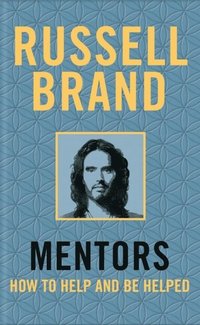 How to Help and be Helped

av Russell Brand
Inbunden Engelska, 2019-01-24
139
Köp
Spara som favorit
Skickas inom 10-15 vardagar.
Fri frakt inom Sverige över 159 kr för privatpersoner.
Could happiness lie in helping others and being open to accepting help yourself? Mentors - the follow up to Sunday Times number one bestseller, Recovery - describes the benefits of seeking and offering help. `I have mentors in every area of my life, as a comic, a dad, a recovering drug addict, a spiritual being and as a man who believes that we, as individuals and the great globe itself, are works in progress and that through a chain of mentorship we can improve individually and globally, together . . . One of the unexpected advantages my drug addiction granted is that the process of recovery that I practise includes a mentorship tradition. I will encourage you to find mentors of your own and explain how you may better use the ones you already have. Furthermore, I will tell you about my experiences mentoring others and how invaluable that has been on my ongoing journey to self-acceptance and how it has helped me to transform from a bewildered and volatile vagabond to a (mostly) present and (usually) focussed husband and father.' - Russell Brand Mentors: How to Help and Be Helped describes the impact that a series of significant people have had on the author - from the wayward youths he tried to emulate growing up in Essex, through the first ex-junkie sage, to the people he turns to today to help him be a better father. It explores how we all - consciously and unconsciously - choose guides, mentors and heroes throughout our lives and examines the new perspectives they can bring.
Visa hela texten

Russell Brand is a comedian and an addict. He's been addicted to drugs, sex, fame, money and power. Even now as a new father, fifteen years into recovery he still writes about himself in the third person and that can't be healthy. This is his fifth book. He still performs as a comic and is studying for an MA in Religion in Global Politics. He has two cats, a dog, a wife, two babies, ten chickens and sixty thousand bees in spite of being vegan curious. He is certain that the material world is an illusion but still keeps licking the walls of the hologram.