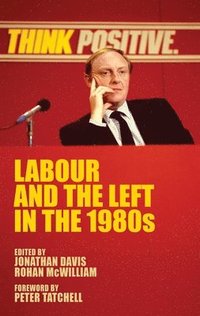 av Jonathan Davis, Rohan McWilliam
Inbunden Engelska, 2017-11-24
999
Köp
Spara som favorit
Skickas inom 3-6 vardagar.
Fri frakt inom Sverige för privatpersoner.
This volume of essays constitutes the first history of Labour and left-wing politics in the decade when Margaret Thatcher reshaped modern Britain. Leading scholars explore aspects of left-wing culture, activities and ideas at a time when social democracy was in crisis. There are articles about political leadership, economic alternatives, gay rights, the miners' strike, the Militant Tendency and the politics of race. The book also situates the crisis of the left in international terms as the socialist world began to collapse. Tony Blair's New Labour disavowed the 1980s left, associating it with failure, but this volume argues for a more complex approach. Many of the causes it championed are now mainstream, suggesting that the time has come to reassess 1980s progressive politics, despite its undeniable electoral failures. With this in mind, the contributors offer ground-breaking research and penetrating arguments about the strange death of Labour Britain. -- .
Visa hela texten

'This volume is a reappraisal of the 1980s as not a time of political failure but also 'a creative decade for the left. Victories may have been few but there was no lack of energy' (p. 2). It claims that if the right won the economic argument of this period, the left helped set the social and moral agenda of the twenty-first century.' Twentieth Century British History 'An illuminating book and always a serious one, offering the reader a number of full and useful discussions.' Cercles Revue 'This book reassesses both the Labour Party and the wider left in the 1980s, suggesting that this was a more creative and exciting period than has often been assumed. . The wide-ranging chapters map out important themes in the study of Labour and the left in the 1980s, and set new agendas for research.' - English Historical Review -- .

Bloggat om Labour and the Left in the 1980s

Foreword by Peter Tatchell Introduction: new histories of Labour and the left in the 1980s - Jonathan Davis and Rohan McWilliam PART I: The crisis of the Labour Party 1 Retrieving or re-Imagining the past? The case of 'Old Labour', 1979-94 - Eric Shaw 2 Leading the Labour Party in the 1980s - Martin Farr 3 Labour's liberalism: gay rights and video nasties - Paul Bloomfield 4 Responsible capitalism: Labour's industrial policy and the idea of a National Investment Bank during the long 1980s - Richard Carr PART II: The British Left in a global context 5 Neil Kinnock's perestroika: Labour and the Soviet influence - Jonathan Davis 6 The international context: end of an era - John Callaghan PART III: Currents of the Wider Left 7 Militant's laboratory: Liverpool City Council's struggle with the Thatcher government - Neil Pye 8 'Fill a Bag and Feed a Family': the miners' strike and its supporters - Maroula Joannou 9 'Race Today cannot fail': black radicalism in the long 1980s - Robin Bunce Index -- .