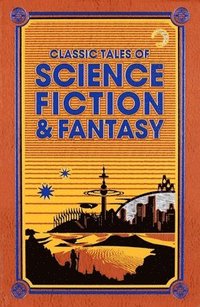 av Jules Verne, H G Wells, Edgar Rice Burroughs, Jack London, Sir Arthur Conan Doyle
(1 röst)
Inbunden Engelska, 2016-11-24
284
Köp
Spara som favorit
Finns även som
Visa alla 1 format & utgåvor
Blast off into the unknown with this collection of ten classical works of science fiction and fantasy. Long before we ventured into outer space or explored the most remote regions of the planet, writers have spun stories of what might lie in those unknown worlds, or what awaits humanity in the future. Classic Tales of Science Fiction & Fantasy is a collection of ten novels and short stories that blazed the trail for the popular genre. Works by acclaimed authors such as Jules Verne, H. G. Wells, Edgar Rice Burroughs, Sir Arthur Conan Doyle, Jack London, and H. P. Lovecraft will transport the reader to distant places and times-and set the imagination ablaze!
Visa hela texten

French writer Jules Verne (February 8, 1828 - March 24, 1905) pioneered the science fiction literary genre. He published many plays, essays, short stories, and poems during his lifetime, but is best known for Twenty Thousand Leagues Under the Sea, Around the World in 80 Days, and A Journey to the Center of the Earth. Today, he is one of the most translated authors in the world. English author H. G. Wells is best known for his work in the science fiction genre. He was also a prolific writer in many other genres, including contemporary novels, history, politics, and social commentary, even writing textbooks and rules for war games. He was born on September 21, 1866, and died on August 13, 1946. Edgar Rice Burroughs was an American writer, best known for his creations of the jungle hero Tarzan and the heroic Mars adventurer John Carter. John Griffith "Jack" London was an American author, journalist, and social activist. He was one of the first fiction writers to obtain worldwide celebrity and to amass a vast fortune from his fiction alone. His most famous works include The Call of the Wild and White Fang. Arthur Conan Doyle (22 May 1859 - 7 July 1930) was a Scottish physician and writer, most noted for his stories about the detective Sherlock Holmes, which are generally considered a major innovation in the field of crime fiction. He was a prolific writer whose other works include science fiction stories, historical novels, plays and romances, poetry, and non-fiction.