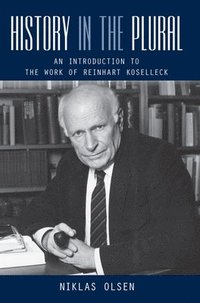 History in the Plural

An Introduction to the Work of Reinhart Koselleck

av Niklas Olsen
Häftad Engelska, 2014-02-01
369
Köp
Spara som favorit
Finns även som
Visa alla 2 format & utgåvor
Reinhart Koselleck (1923-2006) was one of most imposing and influential European intellectual historians in the twentieth century. Constantly probing and transgressing the boundaries of mainstream historical writing, he created numerous highly innovative approaches, absorbing influences from other academic disciplines as represented in the work of philosophers and political thinkers like Hans Georg Gadamer and Carl Schmitt and that of internationally renowned scholars such as Hayden White, Michel Foucault, and Quentin Skinner. An advocate of "grand theory," Koselleck was an inspiration to many scholars and helped move the discipline into new directions (such as conceptual history, theories of historical times and memory) and across disciplinary and national boundaries. He thus achieved a degree of international fame that was unusual for a German historian after 1945. This book not only presents the life and work of a "great thinker" and European intellectual, it also contributes to our understanding of complex theoretical and methodological issues in the cultural sciences and to our knowledge of the history of political, historical, and cultural thought in Germany from the 1950s to the present.
Visa hela texten

"...the first profound comprehensive evaluation of Reinhart Koselleck's work. It is a remarkable achievement in that it analyses Koselleck's major publications and his work at the "Geschichtliche Grundbegriffe" in great detail and integrates them into the overall context of his work." * German Studies Review "Befitting its subject, this book is a methodologically sound and theoretically sophisticated piece of scholarship. Niklas Olsen has done the English-speaking world a profound service by situating the work of Reinhart Koselleck-one of the most compelling theorists of history of recent memory-back into the many contexts out of which it emerged and which it eventually helped to transform over the course of a distinguished career...Koselleck's meditations on the multi-faceted natures of both historical time and historical writing are more relevant than ever. And to these profound meditations History in the Plural will no doubt remain a trustworthy guide." * American Historical Review "[Olsen] has an encyclopedic grasp of all of Koselleck's published writings. Commendably, [he] has also mastered the vast secondary literature on Koselleck and includes hundreds of intriguing references for his readers to explore." * Central European History "All those with an interest in social sciences, and particularly in historical semantics, the theory of history and intellectual history, have every reason to welcome this book and congratulate the author for this splendid accomplishment.. It is essential reading for all those interested in conceptual history, the theory of history, the study of historiography and memory, and in social sciences in general, not only traces the career of that great European intellectual, Reinhart Koselleck, but also, in doing so, offers a broad panorama of some of the crucial theoretical and methodological debates of the past sixty years, while also touching on certain aspects of German political and social life from the post-World War II period." * Contributions to the History of Concepts "[This] groundbreaking study of Koselleck, his works and the contexts in which he developed his thoughts [is] a welcome contribution to our knowledge of one of the most vital and pertinent historical theorists of the twentieth century. History in the Pluralcontributes to the on-going historiographical discussions about German intellectuals in the twentieth century, and...is a valuable contribution to the reception of Koselleck's work in non-German speaking academic traditions." * European Review of History-Revue europeenne d'histoire "Given the widespread appreciation of Koselleck's work, especially by his contemporaries and disciples, it was not an easy task for Niklas Olsen to be the first to deliver a comprehensive overview of his multifaceted oeuvre. The author succeeded in this, and it is his achievement to present Reinhart Koselleck to the English-language professional public as one of the most important German historians of the postwar period." * H-Soz-u-Kult "This is the first intellectual biography, in any language, on post-war Germany's greatest theorist of history, Reinhart Koselleck. It not only illuminates Koselleck's role in founding conceptual history, but also introduces his important accounts of historical time, of historical anthropology, and of political iconology. Both students of post-war German intellectual history and, broadly speaking, of philosophies of history will find this an immensely rich and stimulating volume." * Jan-Werner Muller, Professor of Politics and Founding Director, Project in the History of Political Thought, Princeton University "This is a very thorough and, at the same time, original take on Reinhard Koselleck's work...As the major representative of German Begriffsgeschichte, he deserves to be better known in the English-speaking world, and this volum

Niklas Olsen received his PhD in History from the European University Institute in Florence. He is currently a postdoctoral fellow at the University of Copenhagen working on a project on the variants of liberalism in Denmark and Western Europe, 1945-1990.