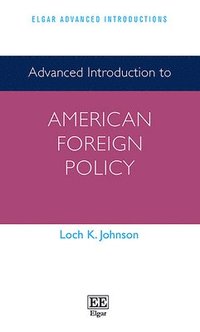 av Loch K Johnson
Häftad Engelska, 2021-08-17
222
Köp
Spara som favorit
Finns även som
Visa alla 2 format & utgåvor
Elgar Advanced Introductions are stimulating and thoughtful introductions to major fields in the social sciences, business and law, expertly written by the world's leading scholars. Designed to be accessible yet rigorous, they offer concise and lucid surveys of the substantive and policy issues associated with discrete subject areas. Providing a comprehensive account of America's constitutional framework, this Advanced Introduction examines how U.S officials carry out America's foreign policy objectives through diplomacy, trade agreements, secretive covert actions, and the use of military force. Loch K. Johnson delivers an invigorating examination of ethical and legal aspects of American foreign policy as well as providing a new perspective on topics such as domestic politics, diplomacy and policymaking. Key Features include: Analysis of the international setting for U.S. foreign policy activities Examination of foreign policy decision making from domestic, individual and international settings. Discussion of the relationship between the United States and other nations, international organizations, and various global factions. Concise and timely, this Advanced Introduction will be a beneficial read to foreign policy, American studies and international relations students and researchers. This will also be a key resource for military academies and organizations seeking a better understanding of the position of the United States in global affairs.
Visa hela texten

'American foreign policy has been on a roller-coaster ride since the end of the Cold War. Instead of ushering in an era of peace and global cooperation, we have witnessed the 9/11 terrorist attacks, ''forever wars'' in Afghanistan and Iraq, a return of isolationism (''America First'') and a looming confrontation with a rising superpower, China. Rarely has there been a greater need for a book to provide understanding and insight into the history, constitutional basis, and practice of American foreign policy. Professor Loch Johnson's account does that, just in time.' - Karl F. Inderfurth, Former US Assistant Secretary of State (1997-2001) and Former US Representative to the United Nations (1993-1997) 'Professor Loch Johnson's Advanced Introduction to American Foreign Policy has all the qualities I look for in an excellent textbook. The writing is clear. The concepts are nicely explained. The history of U.S. foreign policy is adeptly described. The domestic and international influences on the making of foreign policy are explained in a way that students will understand. The human dimension is never ignored. And the book is concise, which gives it a clear appeal over elephantine textbooks which almost no student wants to read.' - David M. Barrett, Villanova University College of Liberal Arts and Sciences, US

Loch K. Johnson, School of Public and International Affairs, University of Georgia, US