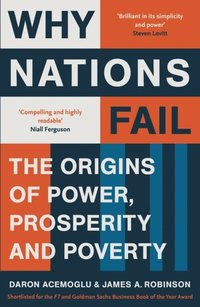 The Origins of Power, Prosperity and Poverty

av Daron Acemoglu, James A Robinson
(5 röster)  |  Läs 3 recensioner
Häftad Engelska, 2013-02-01
149
Köp
Spara som favorit
Skickas inom 5-8 vardagar.
Fri frakt inom Sverige över 159 kr för privatpersoner.
Finns även som
Visa alla 3 format & utgåvor
Shortlisted for the Financial Times and Goldman Sachs Business Book of the Year Award 2012. Why are some nations more prosperous than others? Why Nations Fail sets out to answer this question, with a compelling and elegantly argued new theory: that it is not down to climate, geography or culture, but because of institutions. Drawing on an extraordinary range of contemporary and historical examples, from ancient Rome through the Tudors to modern-day China, leading academics Daron Acemoglu and James A. Robinson show that to invest and prosper, people need to know that if they work hard, they can make money and actually keep it - and this means sound institutions that allow virtuous circles of innovation, expansion and peace. Based on fifteen years of research, and answering the competing arguments of authors ranging from Max Weber to Jeffrey Sachs and Jared Diamond, Acemoglu and Robinson step boldly into the territory of Francis Fukuyama and Ian Morris. They blend economics, politics, history and current affairs to provide a new, powerful and persuasive way of understanding wealth and poverty.
Visa hela texten

A must-read. Acemoglu and Robinson are intellectual heavyweights of the first rank * Guardian * An important book * New York Times * An intellectually rich book that develops an important thesis with verve * FT * It's a great read. Like me, you may succumb to reading it in one go, and then you may come back to it again and again. -- Jared Diamond, Pulitzer-prize-winning author A must-read. Acemoglu and Robinson are intellectual heavyweights of the first rank ... they have done you the courtesy of writing a book that while at the intellectual cutting edge is not just readable but engrossing ... erudite and fascinating. -- Paul Collier * Observer * For those who think that a nation's economic fate is determined by geography or culture, Daron Acemoglu and Jim Robinson have bad news. It's man-made institutions, not the lay of the land or the faith of our forefathers, that determine whether a country is rich or poor. Synthesizing brilliantly the work of theorists from Adam Smith to Douglass North with more recent empirical research by economic historians, Acemoglu and Robinson have produced a compelling and highly readable book. And their conclusion is a cheering one: the authoritarian "extractive" institutions like the one's that drive growth in China today are bound to run out of steam. Without the inclusive institutions that first evolved in the West, sustainable growth is impossible, because only a truly free society can foster genuine innovation and the creative destruction that is its corollary. * Niall Ferguson, author of 'The Ascent of Money' * This fascinating and readable book centers on the complex joint evolution of political and economic institutions, in good directions and bad. It strikes a delicate balance between the logic of political and economic behavior and the shifts in direction created by contingent historical events, large and small at 'critical junctures'. Acemoglu and Robinson provide an enormous range of historical examples to show how such shifts can tilt toward favorable institutions, progressive innovation and economic success or toward repressive institutions and eventual decay or stagnation. Somehow they can generate both excitement and reflection. -- Robert Solow, Nobel Laureate in Economics It's the politics, stupid! That is Acemoglu and Robinson's simple yet compelling explanation for why so many countries fail to develop. From the absolutism of the Stuarts to the antebellum South, from Sierra Leone to Colombia, this magisterial work shows how powerful elites rig the rules to benefit themselves at the expense of the many. Charting a careful course between the pessimists and optimists, the authors demonstrate history and geography need not be destiny. But they also document how sensible economic ideas and policies often achieve little in the absence of fundamental political change. * Dani Rodrik, Kennedy School of Government, Harvard Universitry * Two of the world's best and most erudite economists turn to the hardest issue of all: why are some nations poor and others rich? Written with a deep knowledge of economics and political history, this is perhaps the most powerful statement made to date that 'institutions matter.' A provocative, instructive, yet thoroughly enthralling book. -- Joel Mokyr, Robert H. Strotz Professor of Arts and Sciences and Professor of Economics and History, Northwestern University Imagine sitting around a table listening to Jared Diamond, Joseph Schumpeter, and James Madison reflect on over two thousand years of political and economic history. Imagine that they weave their ideas into a coherent theoretical framework based on limiting extraction, promoting creative destruction, and creating strong political institutions that share power and you begin to see the contribution of this brilliant and engagingly written book. -- Scott E. Page, University of Michigan and Santa Fre Institute In this stunningly wide ranging book Acemoglu and Robinson ask a simple b

Daron Acemoglu is the Killian Professor of Economics at MIT and recipient of the prestigious John Bates Clark Medal. James A. Robinson is a political scientist and economist and the David Florence Professor of Government at Harvard University, and a world-renowned expert on Latin America and Africa. They are the authors of Economic Origins of Dictatorship and Democracy, which won numerous prizes.