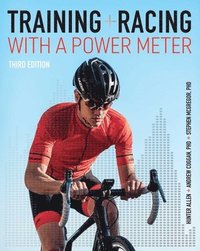 Training and Racing with a Power Meter

av Hunter Allen, Andrew R Coggan, Stephen McGregor
Häftad Engelska, 2019-04-17
279
Köp
Spara som favorit
Finns även som
Visa alla 1 format & utgåvor
Training and Racing with a Power Meter brings the advanced power-based training techniques of elite cyclists and triathletes to everyone. A power meter can unlock more speed and endurance than any other training tool-but only if you understand the data. This new third edition of Training and Racing with a Power Meter updates the comprehensive guide so that any rider can exploit the incredible usefulness of any power meter. Pioneering cycling coach Hunter Allen and exercise physiologists Dr. Andy Coggan and Stephen McGregor show how to use a power meter to find your baseline power data, profile your strengths and weaknesses, measure fitness and fatigue, optimize your daily workouts, peak for races, and set and adjust your racing strategy during a race. This third edition includes: All-new power metrics: FRC, Pmax, mFTP, Power Duration Curve, and more Two new power-based training plans for masters cyclists and triathletes New training plans to raise Functional Threshold Power Over 100 new power-based workouts New guidance for triathletes on pacing the bike and run New case studies on master cyclists and triathletes Methods to test power duration and pinpoint weaknesses in a variety of race distances 100 newly illustrated charts Training and Racing with a Power Meter, 3rd Ed. is the definitive, comprehensive guide to using a power meter. Armed with the revolutionary techniques from this guide, cyclists and triathletes can achieve lasting improvements for their best performances ever.
Visa hela texten

Hunter Allen is considered a foremost authority on using power meters to excel in endurance sports. Over the course of his coaching career, he has analyzed thousands of power-meter files and consulted with companies to further the capabilities of power-meter software and products. Having taught USA Cycling power certification courses since 2005 and traveled to more than 20 countries, Hunter has equipped thousands of coaches and cyclists with the principles of training with power. A USA Cycling Level I coach, founder of the Peaks Coaching Group, co-founder of TrainingPeaks Software, and a former professional cyclist with the Navigators team, Hunter has been coaching endurance athletes since 1995. His Peaks Coaching Group athletes have achieved more than 2,000 victories, numerous national and world championship titles, and Olympic medals. Hunter was also the BMX technical coach for the 2008 Beijing Olympics. Hunter holds a B.A. in Economics from Randolph-Macon College. He resides in Bedford, Virginia, with his wife, Kate, and their children, Thomas, Jack, and Susannah. Andrew R. Coggan, Ph.D., is an internationally recognized exercise physiologist. Formerly a national-caliber masters cyclist and time trial record holder, Andrew is also widely recognized as one of the leading experts on the use of power meters in training. Many of the concepts discussed in Training and Racing with a Power Meter and featured in WKO4 and other desktop or online software are the result of Andrew's work with cyclists and coaches. He is the originator of the normalized power, TSS, power profiling, quadrant analysis, and the Performance Manager concepts. As a result of his contributions, in 2006 he was honored by USA Cycling with their Sport Science Award and named a Finalist for the US Olympic Committee's Doc Counsilman Award. He is an Associate Professor in Kinesiology and Cellular and Integrative Physiology at Indiana University-Purdue University Indianapolis. He has published numerous scientific articles on a diverse range of topics, including the physiological adaptations to endurance training and the effects of aging on muscle metabolism during exercise. Most recently, his research has focused upon the effects of dietary nitrate on muscle contractile function. Andrew Coggan earned his PhD in exercise physiology from the University of Texas and an MS in human bioenergetics from Ball State University. He lives in Brownsburg, Indiana, with his wife, Angela (a former elite national champion track cyclist), and children, Madeleine and Gavin. Stephen J. McGregor, PhD, is a pioneer in the development of training concepts and software designed to maximize the benefits of training with technology. Most notably, Stephen created the normalized graded pace (NGP) algorithm and the run training stress score (rTSS), specifically designed for running. He has also developed the Dynamic Training Load (DTL) system for quantifying training load in dynamic team sports. Stephen is the director of the Applied Physiology Laboratory at Eastern Michigan University and has published and presented numerous research papers examining muscle injury, performance modeling, running physiology, and performance quantification using technology. He earned a doctorate in exercise physiology and has served on the science and education faculty for USA Cycling since 2005 where he presents Power and Elite Level 1 Coaching certification clinics. A former intercollegiate soccer player, triathlete, and elite competitive cyclist, Stephen has coached endurance athletes for almost 25 years and serves as a coach/consultant to numerous international and Olympic-caliber cyclists and runners. In 2016 he was the recipient of the Order of Ikkos as the coach of an Olympic medalist in cycling.

Foreword by Joe Friel Acknowledgments Introduction Abbreviations Why Train with Power? Power Tools Power-Based Training: Where to Begin? Determining Your Strengths and Weaknesses Using Power for Optimal Workouts Interpreting the Data Beyond Average Power Shifting to the Power Duration Model Using Power to Manage Performance Developing a Power-Based Training Plan Tracking Changes in Your Fitness A Powerful Triathlete Racing Faster with a Power Meter Power for Other Disciplines: Cyclocross, Track, Ultra-Endurance Epilogue: Putting It All Together References Appendix: Workout Guide Glossary Index About the Authors