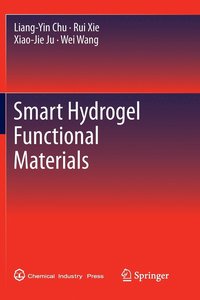 av Liang-Yin Chu, Rui Xie, Xiao-Jie Ju, Wei Wang
Häftad Engelska, 2016-08-27
1489
Köp
Spara som favorit
Finns även som
Visa alla 2 format & utgåvor
Smart Hydrogel Functional Materials comprehensively and systematically describes our current understanding of smart or intelligent hydrogel functional materials with environmental stimuli-responsive functions. The contents range from hydrogels (including hydrogel-functionalized membranes) to microgels (including hydrogel-functionalized microcapsules) with various response properties, such as thermo-response, pH-response, pH-/thermo-dual-response, glucose-response, ethanol-response, ion-recognition, molecular-recognition, and so on. Most of the contents in this book represent the fresh achievements of the authors' group on smart hydrogel functional materials. While all chapters can be read as stand-alone papers, together they clearly describe the design concepts, fabrication strategies and methods, microstructures and performances of smart hydrogel functional materials. Vivid schematics and illustrations throughout the book enhance the accessibility of the theory and technologies involved. This is an ideal reference book for a broad general readership including chemists, materials researchers, chemical engineers, pharmaceutical scientists and biomedical researchers, who are interested in designing and fabricating smart hydrogel functional materials for various application purposes. Dr. Liang-Yin Chu is a professor at the School of Chemical Engineering, Sichuan University, China. He is a Distinguished Young Scholar of the National Natural Science Foundation of China and a Distinguished Professor of the "Chang Jiang Scholars Program" of the Ministry of Education of China.
Visa hela texten

Dr. Liang-Yin CHU was promoted to a full professor of Chemical Engineering at Sichuan University in 1997 and became Director of the Sichuan Provincial Key Laboratory for Filtration and Separation in 2001. He was a research fellow at the University of Tokyo from October 1999 to September 2001, a visiting scholar at Harvard University from August 2006 to February 2007, a visiting professor at the Ecole Superieure de Physique et de Chimie Industrielles (ESPCI) of Paris from December 2007 to February 2008, and a visiting professor at the University of Birmingham from November to December 2011. Professor Chu has received many honors and awards including the National Natural Science Award nominated by the Ministry of Education of China (2003), Researcher of the Year 2006 in China issued by Scientific Chinese (2007), Distinguished Young Scholar issued by the National Natural Science Foundation of China (2008), and Distinguished Professor of the "Chang Jiang Scholars Program" issued by the Ministry of Education (2009), and Honorary Professor of the University of Birmingham (2012). He has authored/coauthored more than 300 papers, 21 patents, 12 book chapters and three books. He has been devoted to the investigation and development of smart hydrogel functional materials and systems since the end of the last century. Currently, Professor Chu directs a talented research group with a diverse and interdisciplinary focus on the development of new hydrogel functional materials for controlled release and separation, especially environmental stimuli-responsive smart hydrogel functional materials and systems. Dr. Rui XIE received her PhD from Sichuan University. Where she became an associate professor at Sichuan University in 2009. She is a visiting scholar at Harvard University in 2013. Her main research fields are smart hydrogel membranes and microcapsules for separation and controlled release. She has authored and coauthored 88 peer-reviewed papers and 107 scientific papers presented at academic conferences and has been awarded many honors and awards including Electee of New Century Excellent Talents in University issued by the Ministry of Education of China (2011), Top Scientist and Technologist Candidate in Sichuan Province (2011), Best Paper Award issued by the Membrane Industry Association of China (2010), Nomination Award of National Outstanding Doctoral Dissertation of China issued by the Ministry of Education and the Academic Degrees Committee of the State Council (2009), the Outstanding Postgraduate Scholarship funded by the Chinese Academy of Sciences (2005) and the Best Paper Award issued by the Organizing Committee of the 1st National Academic Forum on Chemical Engineering for Ph.D. Candidates in China (2005). Dr. Xiao-Jie JU is an associate professor at Sichuan University. Her current research interests mainly focus on smart materials for controlled-release and targeting drug delivery systems, multi-stimuli-responsive microcapsule membranes for adjustable mass-transfer, and microfluidic technology for the preparation of various microparticles with complex structures. She has authored and coauthored more than 70 papers, 7 of which were highlighted as Front Cover, Back Cover or Frontispiece Papers in leading internationally important academic journals. She has been elected into the program for the New Century Excellent Talents in University supported by the Ministry of Education of the P. R. China (2012), and was awarded the National Outstanding Doctoral Dissertation Award of the P.R. China (2010). Dr. Wei WANG received his Ph.D. degree from Sichuan University in 2012, where he currently serves at Sichuan University as an assistant professor. He has authored and coauthored 15 peer-reviewed papers and a book chapter. His current research interests mainly focus on microfluidics, interfaces and functional hydrogel materials. He has been elected into the "Young Talents" Program at Sichuan University (2012