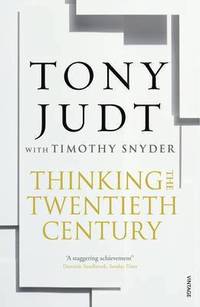 av Timothy Snyder, Tony Judt
Häftad Engelska, 2013-02-07
135
Köp
Spara som favorit
Finns även som
Visa alla 1 format & utgåvor
Two explorers set out on a journey from which only one of them will return. Their unknown land is that often fearsome continent we call the 20th Century. Their route is through their own minds and memories. Both travellers are professional historians still tormented by their own unanswered questions. They needed to talk to one another, and the time was short. This is a book about the past, but it is also an argument for the kind of future we should strive for. Thinking the Twentieth Century is about the life of the mind - and the mindful life.
Visa hela texten

Timothy Snyder's initiative has prompted a sparkling dialogue which, through following the stages of Tony Judt's life and emergence as an exceptional historian, offers important reflections on major currents of political thinking in the 20th century * Ian Kershaw * There is much brilliance here to enjoy ... The best kind of book -- David Aaronovitch * The Times * Brilliant to the bitter end...Tony Judt was combative and razor-sharp even as he was dying...A moving, enlightening and provocative read...It is impossible not to marvel at the dying man's extraordinary mental recall and moral integrity ... This book, bristling with learning, is a staggering achievement -- Dominic Sandbrook * Sunday Times * Thinking the Twentieth Century is a substantial achievement -- Tony Barber * Financial Times * Brilliantly eloquent -- Neil Ascherson * Guardian *

Tony Judt was one of the great historians and public intellectuals of his time. Educated at King's College, Cambridge, and the Ecole Normale Superieure, Paris, he taught at Cambridge, Oxford and Berkeley. He was the Erich Maria Remarque Professor of European Studies at New York University, as well as the founder and director of the Remarque Institute, dedicated to creating an ongoing conversation between Europe and America.The author or editor of fourteen books, Professor Judt was a frequent contributor to The New York Review of Books, the Times Literary Supplement, The New Republic, and The New York Times. Timothy Snyder studied at Brown and Oxford, held fellowships in Paris, Warsaw and Vienna and at Harvard, and is The Houslum Professor of History at Yale University. He is the author of five award-winning and critically-acclaimed books of European history; the most recent of which, Bloodlands: Europe Between Hitler and Stalin, won the Leipzig Prize for European Understanding, was named a book of the year by a dozen publications and has beentranslated into twenty-five languages.