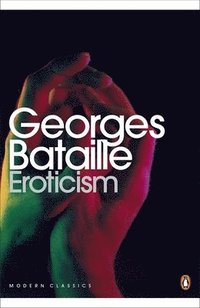 av Georges Bataille
Häftad Engelska, 2012-06-07
121
Köp
Spara som favorit
A philosopher, essayist, novelist, pornographer and fervent Catholic who came to regard the brothels of Paris as his true 'churches', Georges Bataille ranks among the boldest and most disturbing of twentieth-century thinkers. In this influential study he links the underlying sexual basis of religion to death, offering a dazzling array of insights into incest, prostitution, marriage, murder, sadism, sacrifice and violence, as well as including comments on Freud, Sade and Saint Theresa. Everywhere, Eroticism argues, sex is surrounded by taboos, which we must continually transgress in order to overcome the sense of isolation that faces us all.
Visa hela texten

Bataille speaks about man's condition, not his nature ... In him reality is conflict -- Jean-Paul Sartre

Georges Bataille, French essayist and novelist, was born in 1897. He converted to Catholicism, then to Marxism, and was interested in psychoanalysis and mysticism. As curator of the municipal library in Orleans, he led a relatively simple life, although he became involved, usually on the fringes, with the surrealist movement. He founded the literary review Critique in 1946, which he edited until his death in 1962, and was also a founder of the review Documents, which published many of the leading surrealist writers. His writing is a mixture of poetry and philosophy, fantasy and history, and his first novel, Story of the Eye, was written under the pseudonym of Lord Auch. Bataille's other works include the novels Blue of Noon, L'Abbe C and My Mother, and the volumes of essays Eroticism and Literature and Evil.