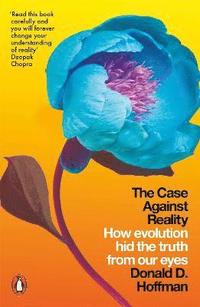 The Case Against Reality

How Evolution Hid the Truth from Our Eyes

av Donald D Hoffman
(1 röst)
Häftad Engelska, 2020-08-20
114
Köp
Spara som favorit
Finns även som
Visa alla 1 format & utgåvor
SHORTLISTED FOR THE PHYSICS WORLD BOOK OF THE YEAR 2019 'One of the deepest and most original thinkers of his generation of cognitive scientists. His startling argument has implications for philosophy, science, and how we understand the world around us' Steven Pinker 'Is reality virtual? It's a question made even more interesting by this book' Barbara Kiser, Nature Do we see the world as it truly is? In The Case Against Reality, pioneering cognitive scientist Donald Hoffman says no? we see what we need in order to survive. Our visual perceptions are not a window onto reality, Hoffman shows us, but instead are interfaces constructed by natural selection. The objects we see around us are not unlike the file icons on our computer desktops: while shaped like a small folder on our screens, the files themselves are made of a series of ones and zeros - too complex for most of us to understand. In a similar way, Hoffman argues, evolution has shaped our perceptions into simplistic illusions to help us navigate the world around us. Yet now these illusions can be manipulated by advertising and design. Drawing on thirty years of Hoffman's own influential research, as well as evolutionary biology, game theory, neuroscience, and philosophy, The Case Against Reality makes the mind-bending yet utterly convincing case that the world is nothing like what we see through our eyes.
Visa hela texten

This book is pure, sunshine-yellow, stop-me-guys-if-I'm-being-crazy California deep-think ... thoughtful, stretching and occasionally brilliant. * The Sunday Times * Don Hoffman is widely regarded as one of the deepest and most original thinkers of his generation of cognitive scientists. His startling argument has implications for philosophy, science, and how we understand the world around us. Yet despite his powerful intellect and strong opinions, Hoffman is a genial writer with an unfailingly pleasant voice." -- Steven Pinker, Johnstone Family Professor, Department of Psychology; Harvard University; Author, 'The Sense of Style'; and 'The Better Angels of Our Nature' In this masterpiece of logic, rationality, science, and mathematics, Donald Hoffman dismantles the local realism of Albert Einstein and the "astonishing hypothesis" of Francis Crick, the scientific giants of the century. Read this book carefully and you will forever change your understanding of reality, both that of the universe and your own self. -- Deepak Chopra Hoffman's truly radical theory will force us to ponder reality in a completely different light. Handle with care. Your perception of the world around you is about to be dismantled! -- Chris Anderson, author of 'TED Talks' Think you know what's really out there? Read this breathtaking, whistle-stop tour of a book that illuminates all the profound weirdness masked by our experience and assumptions. -- David Eagleman, best-selling author of 'The Brain' and 'Incognito' Empirical research on the human brain has made breathtaking progress during the last three decades. What's missing, though, is an attempt to see the 'big picture' of the kind Don Hoffman has introduced in this book. And he does so with the wit, clarity and originality that characterizes all his work. -- VS Ramachandran MBBS. PhD, FRCP, DSc, UCSD and Salk Institute. A fresh view into who we truly are?one that transcends the perceptions that we accept as reality. Hoffman unapologetically takes us down a rabbit hole where we learn that all reality is virtual and that truth lies solely in you, the creator. -- Rudolph Tanzi, coauthor of 'Super Brain' Captivating and courageous ... anyone who reads this book will likely never look at the world the same way again. Hoffman challenges us to rethink some of the most basic foundations of neuroscience and physics, which could prove to be exactly what we need to make progress on the most difficult questions we face about the nature of reality. -- Annaka Harris, author of 'Conscious'

Donald D. Hoffman is Professor of Cognitive Sciences at the University of California, Irvine. He is the author of Visual Intelligence (Norton, 1998), as well as over one hundred scholarly articles on various aspects of human perception and cognition. He received a Distinguished Scientific Award of the American Psychological Association for early career research into visual perception; the Rustum Roy Award of the Chopra Foundation; and the Troland Research Award of the US National Academy of Sciences. His 2015 TED Talk 'Do we see reality as it is?' has had over 2.9 million views.