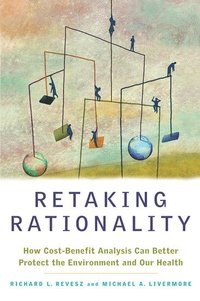 av Richard L Revesz
Häftad Engelska, 2011-05-12
349
Köp
Spara som favorit
Finns även som
Visa alla 3 format & utgåvor
Written in a clear and non-technical manner, Retaking Rationality gives progressive groups and the public the tools they need both to understand and to engage in the debate over the economic analysis of environmental, public health, and safety regulation. Since the Reagan presidency, the most important regulations affecting every American have been required to pass a "cost-benefit " test, but most Americans-including many professionals working for
progressive institutions or elected officials-do not understand how economic analysis works. The result is that industry and conservative ideologues have twisted economic analysis so that good regulations seem to fail the cost-benefit test. This book argues that the public, and progressive institutions, must take up
the fight over how economic analysis is conducted, and gives them the knowledge they need to engage industry and conservatives about when and how economic analysis of regulation should be carried out.
Visa hela texten

<br>"For anyone interested in how good public policy should be made in Washington, reading Retaking Rationality is the place to start. It is a well-reasoned, carefully documented, and well-written book." <br>--Frederick A.O. Schwarz, Jr., Chief Counsel, Brennan Center for Justice at New York University School of Law and former Board Chair, Natural Resources Defense Council <br><p><br>"The application of cost-benefit analysis to environmental regulation is widely believed to have an inherent conservative bias. As Revesz and Livermore show in compelling detail, this is wrong. Cost-benefit analysis is simply a disciplined method of rationally assessing the consequences of proposed courses of action." <br>--Richard Posner, Judge of the U.S. Court of Appeals for the Seventh Circuit and author of Economic Analysis of Law (7th ed. 2007) <br><p><br>"Revesz and Livermore provide a thoughtful and compelling analysis of how cost-benefit analysis can and should be used to further the public good."

Richard Revesz is Dean and Lawrence King Professor of Law at New York University School of Law. He graduated summa cum laude in Civil Engineering and Public Affairs from Princeton University, received an M.S. in Civil Engineering from MIT, and was awarded his J.D. by Yale Law School, where he was the Editor-in-Chief of the Yale Law Journal. Following judicial clerkships with Chief Judge Wilfred Feinberg of the United States Court of Appeals for the Second Circuit, and Justice Thurgood Marshall of the Supreme Court of the United States, Dean Revesz joined the NYU Law faculty in 1985, received tenure in 1990, and was appointed dean in 2002. He has published more than 50 articles and books on environmental and administrative law. His work on issues of federalism and environmental regulation, the valuation of human life and the use of cost-benefit analysis, and the design of liability rules for environmental protection has set the agenda for environmental law scholars for the past decade. He was recently inducted into the American Academy of Arts and Sciences. Michael A. Livermore is currently a law clerk to the Honorable Harry T. Edwards at the U.S. Court of Appeals for the D.C. Circuit. He graduated magna cum laude from New York University School of Law, where he was a managing editor of the NYU Law Review. Between 1995 and 2002, Livermore worked for the New York Public Interest Research Group (NYPIRG) where he was a leading voice of the state's environmental community and helped pass one of the strongest Superfund/Brownfield laws in the country. He has published several pieces of legal scholarship on topics including environmental regulation and international food safety standards. In 2006-2007 Livermore was the postdoctoral fellow at NYU Law's Center for Environmental and Land Use Law.