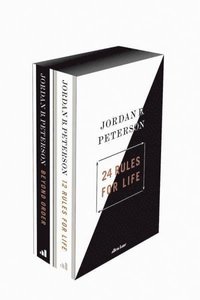 Köp
Spara som favorit
Kan levereras innan julafton!
Jordan B. Peterson, clinical psychologist and 'the world's most influential public intellectual' (New York Times), has improved the lives of millions of people around the world with his books, 12 Rules for Life and Beyond Order. Drawing on ancient wisdom, as well as deeply personal lessons from his own life and clinical practice, he gives us the courage to seek truth and meaning in everything we do. Discover both volumes - Peterson's complete set of 24 rules for life - in this beautifully designed box set.
Visa hela texten

Dr. Jordan B. Peterson is the bestselling author of 12 Rules for Life, which has sold five million copies worldwide and has been published in over 40 languages. His YouTube videos and podcasts have gathered a worldwide audience of hundreds of millions, and his global book tour has reached more than 250,000 people in 100 different cities. After working for decades as a clinical psychologist and professor at Harvard and the University of Toronto, Peterson has become one of the world's most influential public intellectuals. With his students and colleagues, Dr. Peterson has published over a hundred scientific papers, and his 1999 book Maps of Meaning revolutionized the psychology of religion. He lives in Toronto, Ontario with his family.