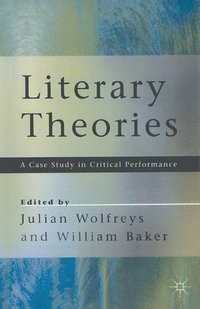 A Case Study in Critical Performance

av William Baker, Dr Julian Wolfreys
Häftad Engelska, 1996-10-01
499
Köp
Spara som favorit
Finns även som
Visa alla 3 format & utgåvor
Every student of literature needs to understand how to use literary theory to analyse and interpret the text. Literary Theories challenges the out-dated notion that theory is something separable from the act of reading and interpretation and, believing that the best way to learn is through practical application, plunges the student into the midst of a range of critical readings. Clearly argued and lucidly written, these essays offer the student reader an interactive introduction to the ways in which contemporary literary theories challenge us to rethink interpretation, literary writing and critical reading.
Visa hela texten

Julian Wolfreys is Professor of Modern Literature and Culture at Loughborough University, UK. He was previously Professor in Literature at the University of Florida, USA. His teaching and research is concerned with 19th- and 20th-century British literary and cultural studies, literary theory, the poetics and politics of identity, and the idea of the city. He is the series editor of Transitions and has written many course texts for Literature students, notably The English Literature Companion.