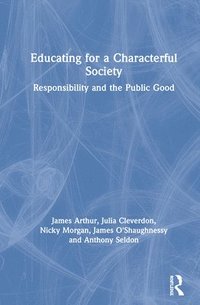 Educating for a Characterful Society

Responsibility and the Public Good

av James Arthur, Julia Cleverdon, Nicky Morgan, James O'Shaughnessy, Anthony Seldon
Inbunden Engelska, 2020-09-10
1859
Köp
Spara som favorit
Finns även som
Visa alla 3 format & utgåvor
The UK National Curriculum states that schools should reaffirm commitment to the virtues of truth, justice, honesty, trust and a sense of duty. This aim, loosely defined as 'character' education, is widely agreed to be critical to healthy development and a fair, just and democratic society. But what exactly is 'character' and how best to educate for it? This vitally important book, written by five internationally prominent figures and government advisers, aims to answer that question. Accessibly written and brimming with inspirational ideas, it looks at questions of research, education, government policy and societal engagement with character, including in the light of COVID-19 and the huge debt owed to the public services frontline. This book is a fascinating and vital read for parents, teachers and anyone concerned with social justice, developing the energy and passion of young people and working towards a better, stronger, fairer society. This could very well be the most important book you read all year!
Visa hela texten

Professor James Arthur, OBE, is the founder and director of the Jubilee Centre for Character and Virtues in the University of Birmingham. He was previously Deputy Pro Vice Chancellor (Staffing) 2015-2019 and Head of the School of Education 2010-2015. Dame Julia Cleverdon served for 16 years as Chief Executive of Business in the Community, and then as Special Advisor to The Prince's Charities from 2007 to 2013. She co-founded Step Up To Serve and the #iwill campaign, following a review she and Amanda Jordan completed for the Prime Minister. She has held voluntary roles chairing Teach First, the Transform Society, the National Literacy Trust, Vice Chair of the Fair Education Alliance and Board member of NCS Trust and the Careers & Enterprise Company. Baroness Nicky Morgan of Cotes is a British politician who served as Secretary of State for Digital, Culture, Media and Sport from 2019 to 2020. A member of the Conservative Party, she was the Member of Parliament (MP) for Loughborough from 2010 until 2019. She served as Secretary of State for Education and Minister for Women and Equalities from 2014 until 2016. Lord James O'Shaughnessy is a former Downing Street aide. He was Director of Policy to Prime Minister David Cameron from May 2010 to October 2011 and was created a life peer in 2015 before being appointed as Parliamentary Under Secretary of State at the Department of Health and Social Care in December 2016. He founded the charity Floreat Education, dedicated to building character and the virtues in schools. Sir Anthony Seldon, British educator and contemporary historian, is Vice Chancellor of the University of Buckingham. As an author, he is known in part for his political biographies of John Major, Tony Blair, Gordon Brown, David Cameron and Theresa May. He was Head of Brighton College and headmaster of Wellington College, one of Britain's coeducational independent boarding schools. He is the co-founder of Action for Happiness and Chair of the National Archives Trust.