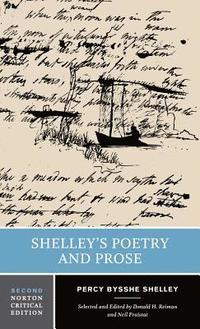 av Percy Bysshe Shelley, Neil Fraistat, Donald H Reiman
Häftad Engelska, 2002-02-01
179
Köp
Spara som favorit
Skickas inom 7-10 vardagar.
Gratis frakt inom Sverige över 159 kr för privatpersoner.
Each selection has been thoroughly reedited, and the order of the poems has been rearranged in light of redating or other reconsiderations. All headnotes are new or updated, and many footnotes have been added, replaced, or revised. "Criticism" reflects the recent renaissance in Shelley studies, the greatest renaissance since 1870-92. All twenty-three essays are new to the Second Edition; among them are the work of Harold Bloom, Stuart Curran, Annette Wheeler Cafarelli, Michael Ferber, James Chandler, and Susan J. Wolfson. A Chronology, an updated Selected Bibliography, and an Index of Titles and First Lines are included.
Visa hela texten

Neil Fraistat is Professor of English at the University of Maryland and a founder and General Editor of the Romantic Circles website. He is co-editor of The Complete Poetry of Percy Bysshe Shelley, of Textual Studies in the Late Age of Print, and of Helen Maria Williams' Letters Written in France. He is recipient of the Society for Textual Scholarship's Fredson Bowers Memorial Prize and the Keats-Shelley Association's Distinguished Scholar Award. Donald H. Reiman, Adjunct Professor of English at the University of Delaware, is co-editor of Shelley and His Circle at the Carl H. Pforzheimer Collection, New York Public Library. He is a director and officer of the Keats-Shelley Association of America, founder of the Wordsworth-Coleridge Association, a founding director of the Society for Textual Scholarship and the Byron Society of America, and a founder of the Romantic Circles website. He has written, edited, or co-edited some 200 volumes of literary and textual criticism.