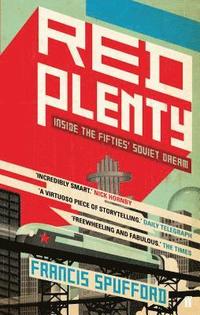 av Francis Spufford
Häftad Engelska, 2011-07-07
125
Köp
Spara som favorit
Skickas inom 5-8 vardagar.
Gratis frakt inom Sverige över 159 kr för privatpersoner.
Finns även som
Visa alla 1 format & utgåvor
The anticipated new novel by Francis Spufford, Light Perpetual, is now available to preorder! The Soviet Union was founded on a fairytale. It was built on 20th-century magic called 'the planned economy', which was going to gush forth an abundance of good things that the penny-pinching lands of capitalism could never match. And just for a little while, in the heady years of the late 1950s, the magic seemed to be working. Red Plenty is about that moment in history, and how it came, and how it went away; about the brief era when, under the rash leadership of Nikita Khrushchev, the Soviet Union looked forward to a future of rich communists and envious capitalists, when Moscow would out-glitter Manhattan, every Lada would be better engineered than a Porsche and sputniks would lead the way to the stars. And it's about the scientists who did their genuinely brilliant best to make the dream come true, to give the tyranny its happy ending.
Visa hela texten

"A hammer-and-sickle version of Altman's Nashville, with central committees replacing country music . . . [Spufford] has one of the most original minds in contemporary literature." --Nick Hornby, "The Believer" "A thrilling book that all enthusiasts of the Big State should read." --Michael Burleigh, "The Sunday Telegraph"

Francis Spufford, a former Sunday Times Young Writer of the Year (1997), has edited two acclaimed literary anthologies and a collection of essays about the history of technology. His first book, I May Be Some Time, won the Writers' Guild Award for Best Non-Fiction Book of 1996, the Banff Mountain Book Prize and a Somerset Maugham Award. His second, The Child That Books Built, gave Neil Gaiman 'the peculiar feeling that there was now a book I didn't need to write'. His third, Backroom Boys, was called 'as nearly perfect as makes no difference' by the Daily Telegraph and was shortlisted for the Aventis Prize. His fourth, Red Plenty was called 'odd, brilliant and crazily brave' in the Evening Standard, longlisted for the Orwell Prize and translated into eight languages. His latest book, Unapologetic, was described by Nick Hornby as 'an incredibly smart, challenging, and beautiful book'. In 2007 he was elected a Fellow of the Royal Society of Literature. He teaches writing at Goldsmiths College and lives near Cambridge.