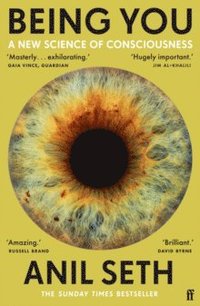 A New Science of Consciousness (The Sunday Times Bestseller)

Köp
Spara som favorit
Kan levereras innan julafton!
Finns även som
Visa alla 1 format & utgåvor
A BOOK OF THE YEAR GUARDIAN, THE ECONOMIST, NEW STATESMAN, FINANCIAL TIMES, BLOOMBERG Anil Seth's radical new theory of consciousness challenges our understanding of perception and reality, doing for brain science what Dawkins did for evolutionary biology. 'A brilliant beast of a book.' DAVID BYRNE 'Hugely important.' JIM AL-KHALILI 'Masterly . . . An exhilarating book: a vast-ranging, phenomenal achievement that will undoubtedly become a seminal text.' GAIA VINCE, GUARDIAN Being You is not as simple as it sounds. Somehow, within each of our brains, billions of neurons work to create our conscious experience. How does this happen? Why do we experience life in the first person? After over twenty years researching the brain, world-renowned neuroscientist Anil Seth puts forward a radical new theory of consciousness and self. His unique theory of what it means to 'be you' challenges our understanding of perception and reality and it turns what you thought you knew about yourself on its head. 'Seth thinks clearly and sharply on one of the hardest problems of science and philosophy, cutting through weeds with a scientist's mind and a storyteller's skill.' ADAM RUTHERFORD 'A page-turner and a mind-blower . . . Beautifully written, crystal clear, deeply insightful.' DAVID EAGLEMAN 'If you read one book about conciousness, it must be Seth's. JULIAN BAGGINI, WALL STREET JOURNAL 'Amazing.' RUSSELL BRAND 'Gripping.' ALEX GARLAND 'I loved it.' MICHAEL POLLAN 'Fascinating.' FINANCIAL TIMES 'Awe-inspring.' NEW STATESMAN 'Brilliant.' CLAIRE TOMALIN, NEW YORK TIMES
Visa hela texten

Anil Seth is a leading British researcher in the field of consciousness science. He is Professor of Cognitive and Computational Neuroscience at the University of Sussex, Co-Director of the Canadian Institute for Advanced Research (CIFAR) Program on Brain, Mind and Consciousness, and a European Research Council Advanced Investigator. His writing has appeared in the Guardian, New Scientist, Scientific American and Granta, and his 2017 TED talk has been viewed nearly 13 million times. @anilkseth.