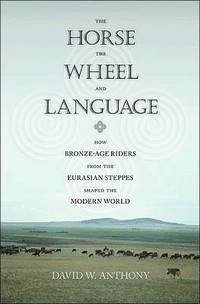 The Horse, the Wheel, and Language

av David W Anthony
(2 röster)
Häftad Engelska, 2010-08-15
265
Köp
Spara som favorit
Finns även som
Visa alla 1 format & utgåvor
Roughly half the world's population speaks languages derived from a shared linguistic source known as Proto-Indo-European. But who were the early speakers of this ancient mother tongue, and how did they manage to spread it around the globe? Until now their identity has remained a tantalizing mystery to linguists, archaeologists, and even Nazis seeking the roots of the Aryan race. The Horse, the Wheel, and Language lifts the veil that has long shrouded these original Indo-European speakers, and reveals how their domestication of horses and use of the wheel spread language and transformed civilization. Linking prehistoric archaeological remains with the development of language, David Anthony identifies the prehistoric peoples of central Eurasia's steppe grasslands as the original speakers of Proto-Indo-European, and shows how their innovative use of the ox wagon, horseback riding, and the warrior's chariot turned the Eurasian steppes into a thriving transcontinental corridor of communication, commerce, and cultural exchange. He explains how they spread their traditions and gave rise to important advances in copper mining, warfare, and patron-client political institutions, thereby ushering in an era of vibrant social change. Anthony also describes his fascinating discovery of how the wear from bits on ancient horse teeth reveals the origins of horseback riding. The Horse, the Wheel, and Language solves a puzzle that has vexed scholars for two centuries--the source of the Indo-European languages and English--and recovers a magnificent and influential civilization from the past.
Visa hela texten

David W. Anthony is professor of anthropology at Hartwick College. He is the editor of "The Lost World of Old Europe" (Princeton). He has conducted extensive archaeological fieldwork in Ukraine, Russia, and Kazakhstan.

Acknowledgments xi PART ONE: Language and Archaeology 1 Chapter One: The Promise and Politics of the Mother Tongue 3 Ancestors 3 Linguists and Chauvinists 6 The Lure of the Mother Tongue 11 A New Solution for an Old Problem 15 Language Extinction and Thought 19 Chapter Two: How to Reconstruct a Dead Language 21 Language Change and Time 22 Phonology: How to Reconstruct a Dead Sound 24 The Lexicon: How to Reconstruct Dead Meanings 32 Syntax and Morphology: The Shape of a Dead Language 36 Conclusion: Raising a Language from the Dead 38 Chapter Three: Language and Time 1: The Last Speakers of Proto-Indo-European 39 The Size of the Chronological Window: How Long Do Languages Last? 39 The Terminal Date for Proto-Indo-European: The Mother Becomes Her Daughters 42 The Oldest and Strangest Daughter (or Cousin?): Anatolian 43 The Next Oldest Inscriptions: Greek and Old Indic 48 Counting the Relatives: How Many in 1500 BCE? 50 Chapter Four: Language and Time 2: Wool, Wheels, and Proto-Indo-European 59 The Wool Vocabulary 59 The Wheel Vocabulary 63 When Was the Wheel Invented 65 The Signifi cance of the Wheel 72 Wagons and the Anatolian Homeland Hypothesis 75 The Birth and Death of Proto-Indo-European 81 Chapter Five: Language and Place: The Location of the Proto-Indo-Europe an Homeland 83 Problems with the Concept of "the Homeland" 83 Finding the Homeland: Ecology and Environment 89 Finding the Homeland: The Economic and Social Setting 91 Finding the Homeland: Uralic and Caucasian Connections 93 The Location of the Proto-Indo-European Homeland 98 Chapter Six: The Archaeology of Language 102 Persistent Frontiers 104 Migration as a Cause of Persistent Material-Culture Frontiers 108 Ecological Frontiers: Different Ways of Making a Living 114 Small-scale Migrations, Elite Recruitment, and Language Shift 117 PART TWO: The Opening of the Eurasian Steppes 121 Chapter Seven: How to Reconstruct a Dead Culture 123 The Three Ages in the Pontic-Caspian Steppes 125 Dating and the Radiocarbon Revolution 126 What Did They Eat? 128 Archaeological Cultures and Living Cultures 130 The Big Questions Ahead 132 Chapter Eight: First Farmers and Herders: The Pontic-Caspian Neolithic 134 Domesticated Animals and Pontic-Caspian Ecol ogy 135 The First Farmer-Forager Frontier in the Pontic- Caspian Region 138 Farmer Meets Forager: The Bug-Dniester Culture 147 Beyond the Frontier: Pontic-Caspian Foragers before Cattle Arrived 154 The Gods Give Cattle 158 Chapter Nine: Cows, Copper, and Chiefs 160 The Early Copper Age in Old Europe 162 The Cucuteni-Tripolye Culture 164 The Dnieper-Donets II Culture 174 The Khvalynsk Culture on the Volga 182 Nalchik and North Caucasian Cultures 186 The Lower Don and North Caspian Steppes 188 The Forest Frontier: The Samara Culture 189 Cows, Social Power, and the Emergence of Tribes 190 Chapter Ten: The Domestication of the Horse and the Origins of Riding: The Tale of the Teeth 193 Where Were Horses First Domesticated? 196 Why Were Horses Domesticated? 200 What Is a Domesticated Horse? 201 Bit Wear and Horse back Riding 206 Indo-European Migrations and Bit Wear at Dereivka 213 Botai and Eneolithic Horseback Riding 216 The Origin of Horse back Riding 221 The Economic and Military Effects of Horseback Riding 222 Chapter Eleven: The End of Old Europe and the Rise of the Steppe 225 Warfare and Alliance: The Cucuteni-Tripolye Culture and the Steppes 230 The Sredni Stog Culture: Horses and Rituals from the East 239 Migrations into the Danube Valley: The Suvorovo-Novodanilovka Complex 249 Warfare, Climate Change, and Language Shift in the Lower Danube Valley 258 After the Collapse 260 Chapter Twelve: Seeds of Change on the Steppe Borders: Maikop Chiefs and Tripolye Towns 263 The Five Cultures of the Final Eneolithic in the Steppes 265 Crisis and Change on the Tripolye Frontier: Towns Bigger Than Cities