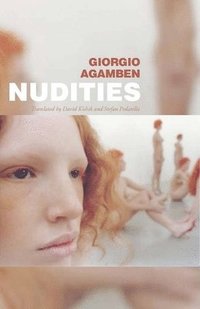 av Giorgio Agamben
Häftad Engelska, 2010-10-06
209
Köp
Spara som favorit
Finns även som
Visa alla 1 format & utgåvor
Encompassing a wide range of subjects, the ten masterful essays gathered here may at first appear unrelated to one another. In truth, Giorgio Agamben's latest book is a mosaic of his most pressing concerns. Take a step backward after reading it from cover to cover, and a world of secret affinities between the chapters slowly comes into focus. Take another step back, and it becomes another indispensable piece of the finely nuanced philosophy that Agamben has been patiently constructing over four decades of sustained research. If nudity is unconcealment, or the absence of all veils, then Nudities is a series of apertures onto truth. A guiding thread of this collection-weaving together the prophet's work of redemption, the glorious bodies of the resurrected, the celebration of the Sabbath, and the specters that stroll the streets of Venice-is inoperativity, or the cessation of work. The term should not be understood as laziness or inertia, but rather as the paradigm of human action in the politics to come. Itself the result of inoperativity, Nudities shuttles between philosophy and poetry, philological erudition and unexpected digression, metaphysical treatise and critique of modern life. And whether the subject at hand is personal identity or the biometric apparatus, the slanderer or the land surveyor, Kafka or Kleist, every page bears the singular imprint of one of the most astute philosophers of our time.
Visa hela texten

Giorgio Agamben, an Italian philosopher and radical political theorist, is Professor of Philosophy at the University of Venice. Stanford University Press has published seven of his previous books: Homo Sacer (1998), Potentialities (1999), The Man Without Content (1999), The End of the Poem (1999), The Open (2004), The Time that Remains (2005), and, most recently, "What is an Apparatus?" and Other Essays(2009).