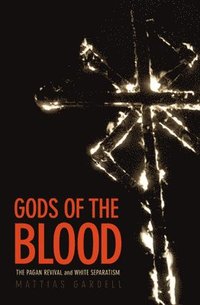 Gods of the Blood

The Pagan Revival and White Separatism

av Mattias Gardell
(2 röster)
Häftad Engelska, 2003-06-01
353
Köp
Spara som favorit
Finns även som
Visa alla 2 format & utgåvor
Racist paganism is a dynamic but understudied element of the American religious and cultural landscape. "Gods of the Blood" is an in-depth survey of the people, ideologies, and practices that make up this fragmented yet increasingly radical and militant milieu.
Visa hela texten

"Gardell adopts an ethnographic, anthropological approach to his subject, which makes the diverse--and often bizarre--beliefs of his subjects easily accessible... [He] provide[s] a useful, alternative framework for analyzing neo-Nazis and their political brethren..." Los Angeles Times "Gods of the Blood will stand as the definitive work on white racist neopaganism in the United States, a movement virtually invisible until now. Mattias Gardell has gained remarkable access to this secretive religious subculture, mapping its feuds, factions, and rivalries." Michael Barkun, author of Religion and the Racist Right "Gods of the Blood represents the culmination of the author's tireless fieldwork among America's radical right: race activists of every description, denizens of the occult underground, and adherents of a variety of small oppositional religio-political belief systems throughout the United States. Never before has a scholar had the means, the determination, or the unparalleled access which Mattias Gardell has been accorded in the American radical right." Jeffrey Kaplan, author of the Encyclopedia of White Power: A SourceBook on the Radical Racist Right

Mattias Gardell is Associate Professor in the History of Religions at Stockholm University. He is the author of In the Name of Elijah Muhammed: Louis Farrakhan and the Nation of Islam, published by Duke University Press.