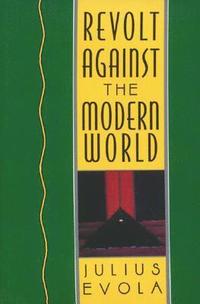 Revolt Against the Modern World

Politics, Religion and Social Order in the Kali Yuga

av Julius Evola
(3 röster)
Inbunden Engelska, 1995-10-01
319
Köp
Spara som favorit
Finns även som
Visa alla 2 format & utgåvor
No idea is as absurd as the idea of progress, which together with its corollary notion of the superiority of modern civilization, has created its own "positive" alibis by falsifying history, by insinuating harmful myths in people's minds, and by proclaiming itself sovereign at the crossroads of the plebeian ideology from which it originated. In order to understand both the spirit of Tradition and its antithesis, modern civilization, it is necessary to begin with the fundamental doctrine of the two natures. According to this doctrine there is a physical order of things and a metaphysical one; there is a mortal nature and an immortal one; there is the superior realm of "being" and the inferior realm of "becoming." Generally speaking, there is a visible and tangible dimension and, prior to and beyond it, an invisible and intangible dimension that is the support, the source, and the true life of the former.--from chapter one. With unflinching gaze and uncompromising intensity Julius Evola analyzes the spiritual and cultural malaise at the heart of Western civilization and all that passes for progress in the modern world. As a gadfly, Evola spares no one and nothing in his survey of what we have lost and where we are headed. At turns prophetic and provocative, Revolt against the Modern Worldoutlines a profound metaphysics of history and demonstrates how and why we have lost contact with the transcendent dimension of being. The revolt advocated by Evola does not resemble the familiar protests of either liberals or conservatives. His criticisms are not limited to exposing the mindless nature of consumerism, the march of progress, the rise of technocracy, or the dominance of unalloyed individualism, although these and other subjects come under his scrutiny. Rather, he attempts to trace in space and time the remote causes and processes that have exercised corrosive influence on what he considers to be the higher values, ideals, beliefs, and codes of conduct--the world of Tradition--that are at the foundation of Western civilization and described in the myths and sacred literature of the Indo?Europeans. Agreeing with the Hindu philosophers that history is the movement of huge cycles and that we are now in the Kali Yuga, the age of dissolution and decadence, Evola finds revolt to be the only logical response for those who oppose the materialism and ritualized meaninglessness of life in the twentieth century. Through a sweeping study of the structures, myths, beliefs, and spiritual traditions of the major Western civilizations, the author compares the characteristics of the modern world with those of traditional societies. The domains explored include politics, law, the rise and fall of empires, the history of the Church, the doctrine of the two natures, life and death, social institutions and the caste system, the limits of racial theories, capitalism and communism, relations between the sexes, and the meaning of warriorhood. At every turn Evola challenges the reader's most cherished assumptions about fundamental aspects of modern life.
Visa hela texten

"Revolt Against the Modern World is destined to remain an essential work and frame-of-reference for anyone seriously involved in native European spirituality." Michael Moynihan, Vortru "Evola does not write in abstract philosophical language but in lively prose, filled with fascinating and concrete details. Given a basic grounding in history and culture, one can dip into the book anywhere and find new twists and reinterpretations. Such an encounter with a totally original mind is a rarity in these days of bland consensus, and a thrilling one whether one agrees with Evola or not." Joscelyn Godwin, Gnosis Magazine

A controversial scholar, philosopher, and social thinker, Julius Evola (1898-1974) has only recently become known to more than a handful of English-speaking readers. An authority on the world's esoteric traditions, Evola wrote extensively on ancient civilizations and the world of Tradition in both East and West. Other books by Evola published by Inner Traditions include Eros and the Mysteries of Love, The Yoga of Power, The Hermetic Tradition, and The Doctrine of Awakening.

Revolt Against the Modern World Politics, Religion, and Social Order in the Kali Yuga A Short Introduction to Julius Evola Translator's Preface Foreword Part One - The World of Tradition 1. The Beginning 2. Regality 3. Polar Symbolism; the Lord of Peace and Justice 4. The Law, the State, the Empire 5. The Mystery of the Rite 6. On the Primordial Nature of the Patriciate 7. Spiritual Virility 8. The Two Paths in the Afterlife 9. Life and Death of Civilizations 10. Initiation and Consecration 11. On the Hierarchical Relationship Between Royalty and Priesthood 12. Universality and Centralism 13. The Soul of Chivalry 14. The Doctrine of the Castes 15. Professional Associations and the Arts; Slavery 16. Bipartition of the Traditional Spirit; Asceticism 17. The Greater and the Lesser Holy War 18. Games and Victory 19. Space, Time, the Earth 20. Man and Woman 21. The Decline of Superior Races Part Two - Genesis and Face of the Modern World Introduction 22. The Doctrine of the Four Ages 23. The Golden Age 24. The Pole and the Hyperborean Region 25. The Northern-Atlantic Cycle 26. North and South 27. The Civilization of the Mother 28. The Cycles of Decadence and the Heroic Cycle 29. Tradition and Antitradition 30. The Heroic-Uranian Western Cycle 31. Syncope of the Western Tradition 32. The Revival of the Empire and the Ghibelline Middle Ages 33. Decline of the Medieval World and the birth of Nations 34. Unrealism and Individualism 35. The Regression of the Castes 36. Nationalism and Collectivism 37. The End of the Cycle Conclusion Appendix: On The Dark Age Index