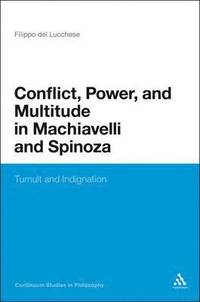 Conflict, Power, and Multitude in Machiavelli and Spinoza

av Dr Filippo Del Lucchese
Häftad Engelska, 2011-10-20
469
Köp
Spara som favorit
Finns även som
Visa alla 3 format & utgåvor
Conflict, Power and Multitude in Machiavelli and Spinoza explores Spinoza's political philosophy by confronting it with that of Niccolo Machiavelli. Filippo Del Lucchese conducts a study of the relationship between Machiavelli and Spinoza from a perspective at once philosophical, historical and political. The book begins by showing how closely tied the two thinkers are in relation to realism. Del Lucchese then goes on to examine the theme of conflict as a crucial element of an understanding of Machiavelli and Spinoza's conceptions of modernity. The book concludes with an examination of the concept of 'multiplicity' and 'plural' expressions of politics, namely Machiavelli's popolo and Spinoza's multitudo. Overall, the Machiavelli-Spinoza axis offers a fruitful perspective through which to analyse the relationship between contending ideas of modernity from a historical point of view, and provides an original point of departure for discussing some key theoretical, political and juridical notions that have resurfaced in contemporary debates.
Visa hela texten

"Filippo Del Lucchese illuminates the axis of political philosophy that links Machiavelli to Spinoza through wonderfully rich and original readings of their texts. In the process he demonstrates that the Machiavelli-Spinoza axis provide a powerful alternative to dominant notions of European modernity: a vision of political life based not on contract and unity but on conflict and multiplici." - Michael Hardt, Duke University, USA, co-author of Empire and Multitude Reconstructs a moment in the history of thought with great rigour, a reconstruction that is an important contribution to the reactivation of an 'alternative modernity' and, more generally, to the underground current of materialist thought. Del Lucchese transforms a series of concepts (law, conflict, the occasion, democracy, multitute, 'commonality) that are absolutely contemporary ... The book is also acutely sensitive to its intervention in the present, its persuasive textual analyses framed with and against contemporary political thought.' - Radical Philosophy

Introduction; 1. Realism; i. The sky, the Sun, the Elements, Man: Necessity and Occasion in the Realism of Machiavelli and Spinoza; ii. 'Freedom' and the 'Common Good', or, in other words, Tyranny; 2. Conflict; i. Spoliatis Anna Supersunt, Furor Anna Ministrat: Philosophy as Resistance; ii. Jerusalem and Rom;iii. Iustitia and Army; 3. Multitude; i. Quid Corpus Possit Nemo Hucusque Determinavit: the Spinozist 'war cry'; Individual Multiple Being; Bibliography.