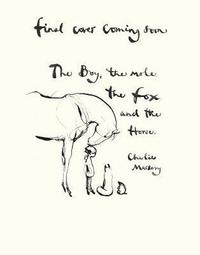 The Boy, The Mole, The Fox and The Horse

av Charlie MacKesy
(7 röster)  |  Läs 2 recensioner
Inbunden Engelska, 2019-10-10
216
Köp
Spara som favorit
Discover the very special book that has captured the hearts of millions of readers all over the world. 'A wonderful work of art and a wonderful window into the human heart' Richard Curtis A book of hope for uncertain times. Enter the world of Charlie's four unlikely friends, discover their story and their most important life lessons. The boy, the mole, the fox and the horse have been shared millions of times online - perhaps you've seen them? They've also been recreated by children in schools and hung on hospital walls. They sometimes even appear on lamp posts and on cafe and bookshop windows. Perhaps you saw the boy and mole on the Comic Relief T-shirt, Love Wins? Here, you will find them together in this book of Charlie's most-loved drawings, adventuring into the Wild and exploring the thoughts and feelings that unite us all.
Visa hela texten

Charlie began sharing conversations between the boy, the mole, the fox and the horse on his social media channels in early 2018. He published The Boy, the Mole, the Fox and the Horse in late 2019 and the book has since brought comfort and joy to over seven million readers worldwide. Charlie collaborates with a number of charities, including Comic Relief - he created the iconic 'Love Wins' t-shirt - as well as the NHS, Choose Love, WWF and The Samaritans. During the pandemic he donated prints, books, drew on hospital walls and posted messages of support to NHS workers, which he continues. Charlie began his career as a cartoonist for The Spectator and a book illustrator for Oxford University Press. He spent time in America as a portrait painter and ran art therapy workshops for Alzheimer's sufferers and Holocaust survivors. He lived and painted in South Africa, and collaborated with Nelson Mandela on a lithograph project, 'The Unity Series'. And worked with Richard Curtis on the set of Love Actually to create a set of drawings to be auctioned for Comic Relief. Away from art, Charlie co-runs a social enterprise, Mama Buci in Zambia. His work features in books, private collections and public spaces, including Highgate Cemetery in London, in hospitals, prisons, churches and university colleges around the UK, and in women's safe houses around the world. He lives in Suffolk with his dog Barney.