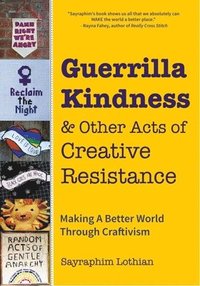 Guerrilla Kindness and Other Acts of Creative Resistance

Making A Better World Through Craftivism

av Sayraphim Lothian, Betsy Greer
Häftad Engelska, 2018-06-14
269
Köp
Spara som favorit
Skickas inom 7-10 vardagar.
Fri frakt inom Sverige för privatpersoner.
Finns även som
Visa alla 1 format & utgåvor
# 1 Best Seller in Crafts & Hobbies, Stenciling Resistance CraftsCraftivism can be your voice of resistance: Craftivism is a non-threatening form of activism that gives people a voice when they feel voiceless and power where they feel powerless. It is an international movement for our time and noted Craftivism expert Sayraphim Lothian has put together the first-ever tutorial book on craftivism. In Guerrilla Kindness: artist, scholar, activist, and YouTube art teacher Sayraphim Lothian gives you an introduction to the art of craftivism, and provides a brief history of creative resistance. This master craftivist shows you how to make and use various crafts for political and protest purposes including: Embroidery Cross stitch Knitting Stenciling Decoupage Stamping and much more Join us in the Craftivism movement: Craftivism is a growing worldwide movement in which hand crafted works are being used to highlight political issues, creatively engage in activism, and encourage change in the world. Craftivists employ their works to open a space for people to be introduced to issues and to broaden the discussion surrounding them. While it might seem that this most colorful movement began recently, creative resistance has been with us for centuries around the globe, and craftivism and makers stating their mind through the medium of art is here to stay.
Visa hela texten

"Guerrilla Kindness is full of ways to show your support for a cause through homemade items. One of my favorites to see were the protest dolls, which can be done for any cause and can even be based on real people. There are also explanations for how to make banners, flags, and even bake goods that can be used to spread your message. There are also some elements of general craft teaching included. Lothian shares how to patch items that you've made so that they can continue to last even longer. These patching plans also allow you to add even more details to your work. While this is a crafting book, what I found tremendously important to point out what Lothian's decision to include a section on symbols and organizations in the introduction of the book. She wants to ensure that those who are crafting have a clear idea of that they are doing and are not alienating people or co-opting something that is not connected to who they are. Guerrilla Kindness and Other Acts of Creative Resistance is a great book for anyone who wants to grow their skills as a maker and is also interested in helping make the world around them a better place." -Nerdy Girl Express

Bloggat om Guerrilla Kindness and Other Acts of Crea...

Sayraphim Lothian is a public artist who utilises as many crafts as she can lay her hands on. She's interested in craftivism and creative resistance in all its forms. Her main body of work revolves around kindness as a form of rebellion, craft as a form of subversion and games in public to overturn expected behaviours. She is inspired by street art, craft history and the rebellious in almost all its forms. Lothian is the writer and host of Craftivism 101, a new tutorial series on the Youtube channel MonsterThinks, did her Masters thesis on Craftivism and is currently writing a book Guerrilla Kindness and Other Acts of Creative Resistance: How to Make A Better World Through Craftivism which will be published through Mango Publishing early 2018. She holds a Bachelor of Arts with Honours in photography, a Graduate Diploma in Primary Teaching from La Trobe University and a Masters in Art in Public Space at RMIT, Melbourne Betsy Greer is a writer, a researcher and a maker who asks lots of questions and drinks lots of coffee. In 2002, she started writing about the connections between craft and activism, two very (at the time) out-of-touch terms who needed a PR boost. Soon armed with the new term "craftivism," thanks to a friend at a knitting circle, she began to write about how embracing your craft, passion and creativity can lead to a more holistic life. In 2003, she started keeping track of all things craftivism at her online homebase, craftivism.com. Lucky enough to be involved with the craft resurgence right from the beginning, she continues to be excited when people take up knitting needles, embroidery thread, fabric or other crafty media in their quest to navigate and process the world around them.