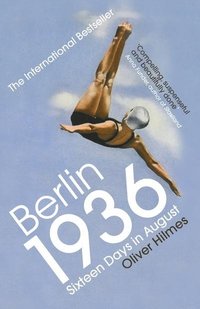 av Oliver Hilmes
Häftad Engelska, 2019-06-06
139
Köp
Spara som favorit
Finns även som
Visa alla 1 format & utgåvor
WINNER OF THE TELEGRAPH SPORTS BOOK AWARD FOR GENERAL OUTSTANDING SPORTS WRITING A captivating account of the Nazi Olympics - told through the voices and stories of those who were there. 'Compelling, suspenseful and beautifully done' Anna Funder, author of STASILAND For sixteen days in the summer of 1936, the world's attention turned to the German capital as it hosted the Olympic Games. Seen through the eyes of a cast of characters - Nazi leaders and foreign diplomats, athletes and journalists, nightclub owners and jazz musicians - Berlin 1936 plunges us into the high tension of this unfolding scene. Alongside the drama in the Olympic Stadium - from the triumph of Jesse Owens to the scandal when an American tourist breaks through the security and manages to kiss Hitler - Oliver Hilmes takes us behind the scenes and into the lives of ordinary Berliners: the woman with a dark secret who steps in front of a train, the transsexual waiting for the Gestapo's knock on the door, and the Jewish boy hoping that Germany may lose in the sporting arena. During the sporting events the dictatorship was partially put on hold; here then, is a last glimpse of the vibrant and diverse life in Berlin in the 1920s and 30s that the Nazis aimed to destroy. LONGLISTED FOR THE WILLIAM HILL SPORTS BOOK OF THE YEAR AWARD 2018
Visa hela texten

Engrossing -- Matt Chilton, **Books of the Year** * Daily Telegraph * Eighty years after the events it depicts, Berlin 1936 is a small masterpiece - you actually feel like you were there... The book was originally in German, but Jefferson Chase's translation is so perfectly judged, you'd never even notice -- Marcus Berkmann * Daily Mail, **Books of the Year** * Entertaining... A vivid collage of vignettes gleaned from diaries, police reports, snippets from newspapers, and so on. It dances from comedy to tragedy, from the ironic to the sinister, to give a picture of a darkening Germany... Hilmes has an eye for incidental detail. -- Robbie Millen * The Times * A German historian charts the Berlin Olympics day by day through a series of memorable vignettes of life under Nazism. Hilmes' deceptively jaunty, even comic tone echoes that of the Games themselves -- Simon Kuper * Financial Times, **Books of the Year** * This book reads like a tourist guide to a city on the eve of destruction -- Gerard DeGroot * The Times, **Books of the Year** *

Oliver Hilmes studied history, politics and psychology in Paris, Marburg and Potsdam, and holds a doctorate in twentieth-century history. His books include Malevolent Muse: The Life of Alma Mahler, Cosima Wagner: The Lady of Bayreuth and Franz Liszt: Musician, Celebrity, Superstar. Berlin 1936 was a top-ten bestseller on publication in Germany.