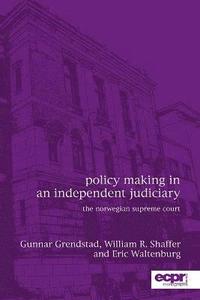 av Eric N Waltenburg
Häftad Engelska, 2015-09-01
449
Köp
Spara som favorit
Skickas inom 10-15 vardagar.
Fri frakt inom Sverige för privatpersoner.
Beställ boken senast måndag 30 november för leverans innan julafton
How do the justices of a nation's highest court arrive at their decisions? In the context of the US Supreme Court, the answer to this question is well established: justices seek to enshrine policy preferences in their decisions, but they do so in a manner consistent with `the law' and in recognition that they are members of an institution with defined expectations and constraints. In other words, a justice's behaviour is a function of motives, means, and opportunities. Using Norway as a case study, this book shows that these forces are not peculiar to the decisional behaviour of American justices. Employing a modified attitudinal model, Grendstad, Shaffer and Waltenburg establish that the preferences of Norway's justices are related to their decisions. Consequently, the authors show how an understanding of judicial behaviour developed and most fully tested in the American judicial system is transportable to the courts of other countries.
Visa hela texten

'This book represents a step forward in the field of comparative judicial politics. While there exists a lot of research on the US Supreme Court, there is a gap on European Constitutional Courts in general, and even more so on European Supreme Courts. The authors contribute to closing this gap by applying the attitudinal model and several hypotheses from the strategic model to the Norwegian Supreme Court. They conduct a rigorous quantitative analysis of the composition and decisions in a long-term perspective, examining the voting behaviour on aspects like economics, gender, and government relations. Recommended reading not only for scholars of judicial politics, but also for those interested in comparative institutions and Scandinavian politics.' Christoph Honnige, University of Hannover 'This is a long-needed, unusual and thought-provoking interdisciplinary study of the Norwegian Supreme Court. It takes up a classic theme of how justices arrive at their decisions, yet it develops different scientific traditions, combining Scandinavian court studies with research fields such as law, elite studies and sociology of law. With its references to the US Supreme Court and other European Supreme Courts, Policy Making in an Independent Judiciary represents the best of interdisciplinary research on courts.' Ole Hammerslev, University of Southern Denmark & University of Oslo 'Policy Making in an Independent Judiciary is a model study of judicial behaviour. It's comprehensive, covering everything from the Court's internal processes to its relations with the government and the public. The data are original, and analysed with care and contemporary methods. Best of all, Grendstad and his colleagues have made the material palatable - and interesting - for social scientists and members of the legal community alike. I would love to see many more studies of this quality, for courts all over Europe.' Lee Epstein, Washington University in St Louis