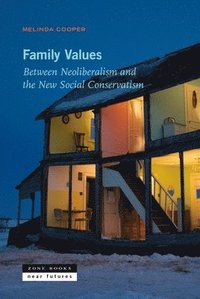 Between Neoliberalism and the New Social Conservatism

av Melinda Cooper
Häftad Engelska, 2019-03-15
199
Köp
Spara som favorit
Skickas inom 7-10 vardagar.
Gratis frakt inom Sverige över 159 kr för privatpersoner.
Finns även som
Visa alla 1 format & utgåvor
An investigation of the roots of the alliance between free-market neoliberals and social conservatives. Why was the discourse of family values so pivotal to the conservative and free-market revolution of the 1980s and why has it continued to exert such a profound influence on American political life? Why have free-market neoliberals so often made common cause with social conservatives on the question of family, despite their differences on all other issues? In this book, Melinda Cooper challenges the idea that neoliberalism privileges atomized individualism over familial solidarities, and contractual freedom over inherited status. Delving into the history of the American poor laws, she shows how the liberal ethos of personal responsibility was always undergirded by a wider imperative of family responsibility and how this investment in kinship obligations is recurrently facilitated the working relationship between free-market liberals and social conservatives. Neoliberalism, she argues, must be understood as an effort to revive and extend the poor law tradition in the contemporary idiom of household debt. As neoliberal policymakers imposed cuts to health, education, and welfare budgets, they simultaneously identified the family as a wholesale alternative to the twentieth-century welfare state. And as the responsibility for deficit spending shifted from the state to the household, the private debt obligations of family were defined as foundational to socioeconomic order. Despite their differences, neoliberals and social conservatives were in agreement that the bonds of family needed to be encouraged-and at the limit enforced-as a necessary counterpart to market freedom. In a series of case studies ranging from Bill Clinton's welfare reform to the AIDS epidemic and from same-sex marriage to the student loan crisis, Cooper explores the key policy contributions made by neoliberal economists and legal theorists. Only by restoring the question of family to its central place in the neoliberal project, she argues, can we make sense of the defining political alliance of our times, that between free-market economics and social conservatism.
Visa hela texten

Cooper offers invaluable insights into how US neoliberals through their focus on the family created the potential for claims to morality that social conservatives of all ilks could find palatable. I plan to include this book on the syllabus the next time I teach a graduate course on neoliberalism, and hope that others, who may be befuddled or fascinated by the contradictions of neoliberalism when it is put into practice, will read this book. -Somatosphere Reorients the unit of social analysis of the neoliberal critique from homo oeconomicus to familia oeconomica, from man to the family, that bastion of liberal progress and possibility that constituted and sustained man all along. Cooper's book will change our conversation. It pro vides such a detailed and comprehensive argument, one so astutely staged on multiple levels of mediation from policy to theory to possibilities and limita tions of commodification itself, that it will certainly become a conceptual index for those interested in understanding the American school of neoliberalism. -Theory & Event Brilliant and original. -London Review of Books If there's one lesson to be drawn from Melinda Cooper's masterful new study of capitalism and the American right, it's that this supposed opposition between neoliberalism and social conservatism is a caricature... The two movements were hardly mere allies of convenience, let alone mortal enemies. On the contrary, Family Values reveals how their close conceptual and practical collaboration helped to build the foundations of the contemporary social world. -Jacobin In an academic world flush with and made into silos by specialized topics, research articles, and books, Melinda Cooper's interdisciplinary integration is a most welcome map of the historical and contemporary forces that created political alliances between neoliberalism and neoconservatism. This book promises to be a classic study of the role that the family played in fomenting alliances between neoconservatives and neoliberals. Many academic disciplines beyond cultural studies may find particular chapters helpful in the classroom as well. -Lateral Magisterial...[Cooper] brilliantly shows how enmeshed we are, as political and economic agents, into the family form, and how necessary this is to the reproduction of neoliberal capitalism. -Dissent Cooper's book leaves us with a bleakly realistic account of the (often Christian) rightwing patriarchal forces whose resoundingly angry response to feminist and pro-welfare activism has sought to stifle the impact of the women's movement from the 1960s onwards, especially in regard to economic, racial and reproductive freedoms. One might assume that similar ideas are at work in the Trump administration today. Under the weight of such antagonism the tenacity of feminism is nothing short of miraculous, and Cooper's sombre analysis serves to remind the pro-feminist left and the women's movement of how few in number we are, and have been. -openDemocracy

Melinda Cooper is Associate Professor in the School of Social and Political Science at the University of Sydney, Australia. She is the author of Life as Surplus: Biotechnology and Capitalism in the Neoliberal Era.