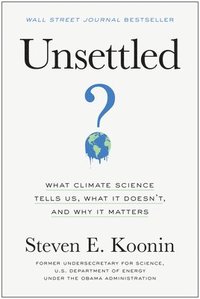 What Climate Science Tells Us, What It Doesn't, and Why It Matters

av Steven E Koonin
(2 röster)
Inbunden Engelska, 2021-04-27
196
Köp
Spara som favorit
"Surging sea levels are inundating the coasts." "Hurricanes and tornadoes are becoming fiercer and more frequent." "Climate change will be an economic disaster." You've heard all this presented as fact. But according to science, all of these statements are profoundly misleading. When it comes to climate change, the media, politicians, and other prominent voices have declared that "the science is settled." In reality, the long game of telephone from research to reports to the popular media is corrupted by misunderstanding and misinformation. Core questions-about the way the climate is responding to our influence, and what the impacts will be-remain largely unanswered. The climate is changing, but the why and how aren't as clear as you've probably been led to believe. Now, one of America's most distinguished scientists is clearing away the fog to explain what science really says (and doesn't say) about our changing climate. In Unsettled: What Climate Science Tells Us, What It Doesn't, and Why It Matters, Steven Koonin draws upon his decades of experience-including as a top science advisor to the Obama administration-to provide up-to-date insights and expert perspective free from political agendas. Fascinating, clear-headed, and full of surprises, this book gives readers the tools to both understand the climate issue and be savvier consumers of science media in general. Koonin takes readers behind the headlines to the more nuanced science itself, showing us where it comes from and guiding us through the implications of the evidence. He dispels popular myths and unveils little-known truths: despite a dramatic rise in greenhouse gas emissions, global temperatures actually decreased from 1940 to 1970. What's more, the models we use to predict the future aren't able to accurately describe the climate of the past, suggesting they are deeply flawed. Koonin also tackles society's response to a changing climate, using data-driven analysis to explain why many proposed "solutions" would be ineffective, and discussing how alternatives like adaptation and, if necessary, geoengineering will ensure humanity continues to prosper. Unsettled is a reality check buoyed by hope, offering the truth about climate science that you aren't getting elsewhere-what we know, what we don't, and what it all means for our future.
Visa hela texten

"We have too many global warming books-but this one is needed. Steven Koonin has the credentials, expertise, and experience to ask the right questions and to give realistic answers." -Vaclav Smil, distinguished professor emeritus at the University of Manitoba "Essential reading and a timely breath of fresh air for climate policy. The science of climate is neither settled nor sufficient to dictate policy. Rather than an existential crisis, we face a wicked problem that requires a pragmatic balancing of costs and benefits." -William W. Hogan,professor of Global Energy Policy at Harvard Kennedy School "Tough talk about climate politics from a statesman scientist-and a vision of what will actually come to pass." -Robert B. Laughlin, Stanford University "Unsettled will definitely and rightly unsettle your climate thoughts, and all for the better. If we are to make trillion dollar investments, we deserve to be as well informed as possible." -Bjorn Lomborg, president of Copenhagen Consensus and visiting fellow at The Hoover Institution at Stanford University

Dr. Steven E. Koonin is a leader in science policy in the United States. He served as Undersecretary for Science in the US Department of Energy under President Obama, where he was the lead author of the Department's Strategic Plan and the inaugural Quadrennial Technology Review (2011). With more than 200 peer-reviewed papers in the fields of physics and astrophysics, scientific computation, energy technology and policy, and climate science, Dr. Koonin was a professor of theoretical physics at Caltech, also serving as Caltech's Vice President and Provost for almost a decade. He is currently a University Professor at New York University, with appointments in the Stern School of Business, the Tandon School of Engineering, and the Department of Physics. Dr. Koonin's memberships include US National Academy of Sciences, the American Academy of Arts and Sciences, and the JASON group of scientists who solve technical problems for the US government. Since 2014, he has been a trustee of the Institute for Defense Analyses and chaired the National Academies' Divisional Committee for Engineering and Physical Sciences from 2014-2019. He is currently an independent governor of the Lawrence Livermore National Laboratory and has served in similar roles for the Los Alamos, Sandia, Brookhaven, and Argonne National Laboratories.

Contents Introduction Part I: The Science 1. What We Know About Warming 2. Humble Human Influences 3. Emissions Explained and Extrapolated 4. Many Muddled Models 5. Hyping the Heat 6. Tempest Terrors 7. Precipitation Perils-From Floods to Fires 8. Sea Level Scares 9. Apocalypses That Ain't 10. Who Broke "The Science" and Why 11. Fixing the Broken Science Part II: The Response 12. The Chimera of Carbon-Free 13. Could the US Catch the Chimera? 14. Plans B Closing Thoughts Endnotes Acknowledgments Index