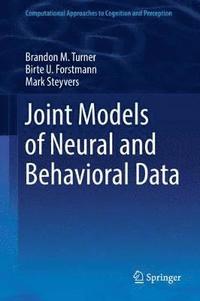 av Brandon M Turner, Birte U Forstmann, Mark Steyvers
Inbunden Engelska, 2019-01-17
839
Köp
Spara som favorit
Skickas inom 3-6 vardagar.
Fri frakt inom Sverige för privatpersoner.
Finns även som
Visa alla 1 format & utgåvor
This book presents a flexible Bayesian framework for combining neural and cognitive models. Traditionally, studies in cognition and cognitive sciences have been done by either observing behavior (e.g., response times, percentage correct, etc.) or by observing neural activity (e.g., the BOLD response). These two types of observations have traditionally supported two separate lines of study, which are led by two different cognitive modelers. Joining neuroimaging and computational modeling in a single hierarchical framework allows the neural data to influence the parameters of the cognitive model and allows behavioral data to constrain the neural model. This Bayesian approach can be used to reveal interactions between behavioral and neural parameters, and ultimately, between neural activity and cognitive mechanisms. Chapters demonstrate the utility of this Bayesian model with a variety of applications, and feature a tutorial chapter where the methods can be applied to an example problem. The book also discusses other joint modeling approaches and future directions. Joint Models of Neural and Behavioral Data will be of interest to advanced graduate students and postdoctoral candidates in an academic setting as well as researchers in the fields of cognitive psychology and neuroscience.
Visa hela texten

Brandon Turner is an Assistant Professor in the Psychology Department at The Ohio State University. His research interests include dynamic models of cognition and perceptual decision making, efficient methods for performing likelihood-free and likelihood-informed Bayesian inference, and unifying behavioral and neural explanations of cognition. His current focus is on understanding how external factors such as the environment, and internal factors such as working memory interact to shape an observer's perception of the world, and ultimately how this perception drives their decisions. Dr. Turner is an editorial board member for the journal Decision. Birte U. Forstmann is a Professor for Cognitive Neurosciences at the University of Amsterdam. She earned her PhD in 2006 at the Max Planck Institute for Human Cognitive and Brain Sciences in Leipzig, Germany. After completing her postdoc in 2008 at the University of Amsterdam, she became tenured Research Fellow at the Cognitive Science Center Amsterdam with the focus of model-based cognitive neurosciences. Since then she has contributed to a range of topics in cognitive neuroscience, experimental psychology, mathematical psychology, and lately also in quantiative neuroanatomy. Despite its diversity, her work is motivated by a single strong conviction, namely that behavioral data and brain measurements need to make contact with psychological theory via concrete mathematical models of latent cognitive processes. Mark Steyvers is a professor in the Department of Cognitive Sciences at the University of California, Irvine. He also holds joint faculty appointments with the Department of Computer Science and the Department of Psychology and Social Behavior at the University of California, Irvine. Dr. Steyvers is Associate Editor for Computational Brain & Behavior and consulting editor for Psychological Review and an editorial board member for Behavior Research Methods.