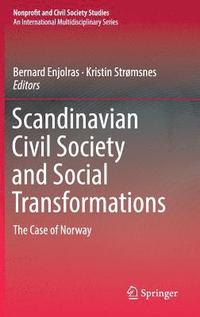 The Case of Norway

av Bernard Enjolras, Kristin Stromsnes
Inbunden Engelska, 2018-04-20
1289
Köp
Spara som favorit
Finns även som
Visa alla 2 format & utgåvor
This book aims at presenting a conceptual apparatus and empirical analysis of the ways Nordic civil society is affected by social transformations by focusing on the Norwegian case. The Norwegian empirical focus allows identifying processes and factors of change that are relevant outside this context and enable us to understand, on a more general basis, the relationship between social transformations and transformations affecting the voluntary sector. This book will make an original contribution to the field of comparative civil society studies both by increasing the available knowledge on the Nordic civil society model and by analyzing the societal transformations affecting civil society over time.
Visa hela texten

Bernard Enjolras is a Research Professor at the Institute for Social Research in Oslo. He is Director of the Center for Research on Civil Society and Voluntary Sector. He has been the coordinator of the EU-FP7 project Third Sector Impact and Editor-in-Chief of Voluntas International Journal of Voluntary and Nonprofit Organizations (ISTR, Springer), as well as Deputy Director and Research Director at the Institute for Social research (2006-2014). His research interests are related to different aspects of civil society and the third sector, public policies and governance issues, civic and political engagement, social media and digitalization, terror and trust, and freedom of speech. He holds a Ph.D. in Sociology, from the University of Quebec in Montreal (Canada) and a Ph.D in Economics from the University of Paris I. Pantheon-Sorbonne (France). He also is a graduate from the Institut d'Etudes Politiques de Paris (Sciences-po). Kristin Stromsnes is Professor at the Department of Comparative Politics, University of Bergen and Senior Researcher at the Uni Research Rokkan Centre. She was one of the founders of Center for Research on Civil Society and Voluntary Sector in 2008, and functioned as Research Coordinator for the center the first five years. Among her main research interests are political participation and mobilization, voluntary organizations and social capital, as well as the Scandinavian civil society model.