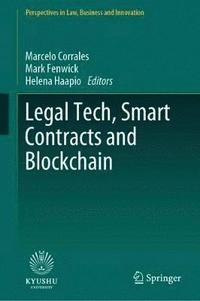 av Marcelo Corrales, Mark Fenwick, Helena Haapio
Inbunden Engelska, 2019-02-20
1669
Köp
Spara som favorit
Skickas inom 10-15 vardagar.
Fri frakt inom Sverige för privatpersoner.
There is a broad consensus amongst law firms and in-house legal departments that next generation "Legal Tech" - particularly in the form of Blockchain-based technologies and Smart Contracts - will have a profound impact on the future operations of all legal service providers. Legal Tech startups are already revolutionizing the legal industry by increasing the speed and efficiency of traditional legal services or replacing them altogether with new technologies. This on-going process of disruption within the legal profession offers significant opportunities for all business. However, it also poses a number of challenges for practitioners, trade associations, technology vendors, and regulators who often struggle to keep up with the technologies, resulting in a widening regulatory "gap." Many uncertainties remain regarding the scope, direction, and effects of these new technologies and their integration with existing practices and legacy systems. Adding to the challenges is the growing need for easy-to-use contracting solutions, on the one hand, and for protecting the users of such solutions, on the other. To respond to the challenges and to provide better legal communications, systems, and services Legal Tech scholars and practitioners have found allies in the emerging field of Legal Design. This collection brings together leading scholars and practitioners working on these issues from diverse jurisdictions. The aim is to introduce Blockchain and Smart Contract technologies, and to examine their on-going impact on the legal profession, business and regulators.
Visa hela texten

Marcelo Corrales is an Attorney-at-Law specializing in intellectual property, information technology, and corporate law. He is currently a visiting scholar at the Institute of European and American Studies, Academia Sinica in Taipei, Taiwan. He has a Doctor of Laws (LL.D.) degree from Kyushu University in Japan. He also holds a Master of Laws (LL.M.) in international economics and business law from Kyushu University, and an LL.M. in law and information technology and an LL.M. in European intellectual property law, both from the University of Stockholm in Sweden. His most recent publications include New Technology, Big Data and the Law (Springer, 2017). Dr. Corrales's past activities have included being a research associate with the Institute for Legal Informatics and IT Law at Leibniz Universitat Hannover (Germany) from 2007 to 2018. Mark Fenwick is Professor of International Business Law at the Faculty of Law, Kyushu University, Fukuoka, Japan. His primary research interests are in the fields of white-collar and corporate crime, and business regulation in a networked age. Recent publications include New Technology, Big Data and the Law (Springer, 2017) and The Shifting Meaning of Legal Certainty in Comparative and Transnational Law (Hart, 2017). He has a Master's and a Ph.D. degree from the Faculty of Law, University of Cambridge, and has been a visiting professor at Chulalongkorn University, Duke University, the University of Hong Kong, Shanghai University of Finance and Economics, the National University of Singapore, Tilburg University, and Vietnam National University. Helena Haapio is an Associate Professor of Business Law at the University of Vaasa, Finland and a Contract Innovator at Lexpert Ltd, Helsinki. After completing legal studies at the University of Turku, Finland, and Cambridge University, England, she served for several years as in-house Legal Counsel in Europe and the United States. A pioneer of the Proactive Law approach, she has for many years promoted the use of simplification and visualization in commercial contracting. Her multidisciplinary research focuses on ways to enhance the functionality and usability of contracts through design. Her books include Next Generation Contracts: A Paradigm Shift (Lexpert 2013) and two titles co-authored with Prof. George Siedel, A Short Guide to Contract Risk (Gower 2013) and Proactive Law for Managers: A Hidden Source of Competitive Advantage (Gower 2011). She also acts as arbitrator in contract disputes.