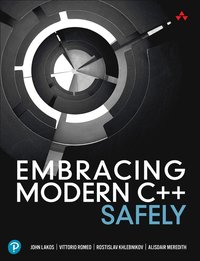 av John Lakos
Häftad Engelska, 2022-02-09
349
Köp
Spara som favorit
In Embracing Modern C++ Safely, John Lakos and Vittorio Romeo analyze each core language feature of "Modern C++" (introduced by C++11 and C++14), illuminating exactly what developers and teams must know to succeed. Lakos and Romeo present extensive real-life code examples; thoroughly describe pitfalls that arise when engineers with diverse experience use these features together, and illuminate issues that repeatedly occur in real-world application development. Drawing on their extensive C++ experience, they focus on major features of C++ 14 and C++ 11 that have been around long enough to be thoroughly evaluated. You'll learn which "modern" features are safe under almost all circumstances; which carry a real risk of misuse and suboptimal results if programmers are improperly educated and trained; and which are generally "unsafe," and should be used rarely if at all. If you're ready to safely make the most of Modern C++, this guide's in-depth, hands-on insights will help you improve your productivity, and build far more robust software.
Visa hela texten

Dr. John Lakos is a senior architect and mentor for software development at Bloomberg LP, where he created the BDE team (c. 2001), which maintains Bloomberg's open-source foundation libraries for C++ development. He is the author of Large-Scale C++ Software Design and Large-Scale C++ Volume I: Process and Architecture (both from Addison-Wesley), and is an active voting member of the C++ Standards committee. Vittorio Romeo is a senior software engineer at Bloomberg LP who builds mission-critical C++ middleware, trains colleagues on modern C++, and has created many open-source C++ libraries and games. Dr. Rostislav Khlebnikov is a team lead and senior software engineer in Bloomberg's BDE team, where he directs the development of high-performance C++ foundation software. Alisdair Meredith is a senior software engineer in Bloomberg's BDE team, a long-standing member of the C++ Standards committee, and a former Chair of its Library Working Group between 2010 and 2015.