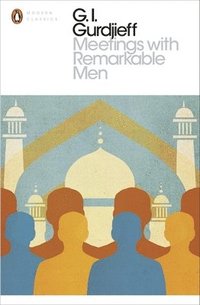 av G I Gurdjieff
(1 röst)
Häftad Engelska, 2015-02-05
108
Köp
Spara som favorit
Skickas inom 5-8 vardagar.
Gratis frakt inom Sverige över 159 kr för privatpersoner.
Finns även som
Visa alla 7 format & utgåvor
The exhilarating, life-affirming call to spiritual arms from world-renowned spiritual teacher G. I. Gurdjieff 'Gurdjieff's voice is heard as a call. He calls because he suffers from the inner chaos in which we live. He calls to us to open our eyes. He asks us why we are here, what we wish for, what forces we obey. He asks us, above all, if we understand what we are . . .' Part adventure narrative, part travelogue, part spiritual guide, Meetings with Remarkable Men is suffused with Gurdjieff's unique perspective on life. With vivacity and charm, he organizes his account around portraits of the remarkable men and women who accompanied him through remote parts of the Near East and Central Asia, and who aided his search for hidden knowledge. Among them are Gurdjieff's own father (a traditional bard), a Russian prince dedicated to the search for Truth, a Christian missionary who entered a World Brotherhood deep in Asia, and a woman who escaped slavery to become a trusted member of Gurdjieff's group of fellow seekers. Meetings with Remarkable Men conveys a haunting sense of what it means to live fully - with conscience, with purpose and with heart.
Visa hela texten

George Ivanovitch Gurdjieff (1877-1949) was born in Alexandropol and trained in Kars as both a priest and physician. Gurdjieff travelled in the remotest regions of Central Asia and the Middle East, before gathering pupils in Moscow before the First World War and continuing his work on the move - first to Essentuki in the Caucasus, and then through Tiflis, Constantinople, Berlin and London to the Chateau de Prieure near Paris, where he re-opened his Institute for the Harmonious Development of Man in 1922 on a larger scale. The story of his unremitting search for a real and universal knowledge, and the exposition of his ideas, are unfolded in his major works: Beelzebub's Tales to His Grandson, Meetings with Remarkable Men, Life is Real Only Then, When 'I am' and Views from the Real World.